Serve Sauron and aid him resurrect to reshape the world.

Destroy Gondor and the free Peoples, and pluder their riches (all failed).

The Easterlings are the inhabitants of Middle-Earth's far eastern lands known as Rhûn (or The East/Eastlands) and dedicated servants of Sauron, who aided him in his war on the rest of Middle-Earth, in particular Gondor, the Easterling's sworn enemies.

The Easterlings were descended from men who had refused to make contact with the Elves and instead isolated themselves in the lands of the Far East, establishing themselves as a war-like and slaving culture with a strict caste system that drew clear distinctions between the warriors and the servants who looked after them. The Easterlings themselves were cruel and dedicated servants of Sauron, who benefitted a great deal from serving him loyally. They also despised Gondor and thus needed little convincing to go to war with them in Sauron's name.

They served as elite soldiers during the siege of Minas Tirith, as allies of the Orcs, the Variags, the Haradrim and their Mumakil, the Corsairs, the Trolls, the Wargs, and the Nazgûl. They proved valuable during the siege, but in the end, the arrival of the Army of the Dead spelled defeat for Mordor and it's allies, including the Easterlings.

The major battle of the Easterlings during the War of the Ring was actually in the northern part of Middle-earth, with the Battle of Dale. The Easterling Emperor led two-hundred thousand men men of the Easterling army to the city-kingdom of Dale, in order to destroy it before doing the same to the Dwarven kingdom of the Lonely Mountain. The battle lasted for four days until the forces of Dale and the Lonely Mountain prevailed though the northeners had the major losses which included King Brand, King Dáin II Ironfoot, and Lord Thorin III Stonehelm.

After the war, it is likely that the Easterlings, like the other Men of Darkness, made peace with their old enemies and in exchange received Sauron's old lands as their own. Though, in the movie continuity, their fate is bleaker, as it is said that one of King Elessar's first acts was to subjugate Rhun, ensuring that the culture of conquerors were themselves finally conquered. 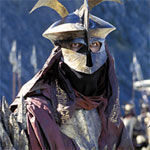 Close-up of an Easterling warrior. 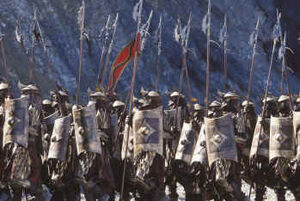 A company of Easterlings march to the Black Gates. 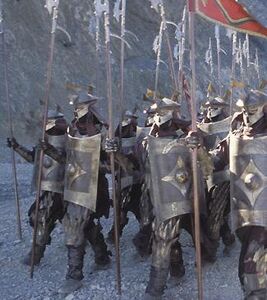