Ebemon, also spelt as EBEmon is a minor villain in Digimon Fusion.

Ebemon was responsible for contolling﻿ Baalmon's friends and was forced to kill Angemon. Ebemon then controlled Shoutmon and his friends and attacked Taiki, but Baalmon stepped in and attacked back. Baalmon then found Ebemon along with one of the three highest Bagura generals Lilithmon. Baalmon shot Ebemon in the head, injuring him and freed Shoutmon and the others from the alien's control. Ebemon then fought with Shoutmon X4 and was destroyed by Shoutmon X4.

Ebemon is a Mega Level Digimon that resembles a robotic extraterrestrial creature with a ray gun and another gun that controls his opponents.

This Cyborg Digimon is adopted from a winning entry in the "Digimon Web Dot-art Contest" which belonged to Yousuke from Gifu prefecture. It is artificially created from a Vademon that was captured and had its configuration data analyzed and improved. In an American facility, called "Area 51", it seems they were using and building extraterrestrial technology, but the truth is shrouded in a mysterious quality. It is said that the USA is covertly conducting research and development on Digimon in order to take possession of the Digital World. 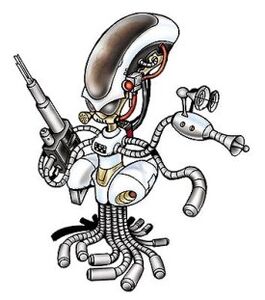 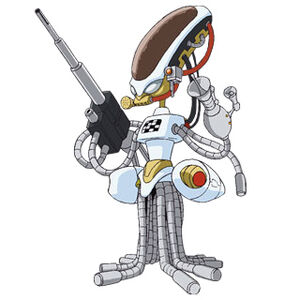 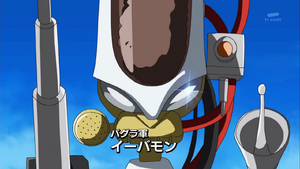