Prevent the children from believing in Santa Claus by stealing their tickets which for them to aboard the Polar Express on the way to the North Pole (failed).

The Ebenezer Scrooge Puppet is a minor antagonist in the 2004 Warner Bros. film The Polar Express (which is based on the 1985 children's book of the same name by Chris Van Allsburg), and the main antagonist of the video game.

He was voiced by Tom Hanks in the film, and Jim Hanks (real life brother of Tom) in the video game.

When the Conductor shows Hero Boy and Hero Girl the toys that were mistreated and thrown away, the Hero Boy is left alone in the abandoned toy car and the Scrooge puppet scares him by calling him a doubter who doesn't believe in Christmas. It is revealed that the Scrooge puppet is actually being controlled by the Hobo from the roof of the car. Hero Boy watches the puppet and, unaware that the Hobo is controlling it, flees and runs back to the main passenger car.

Hero Boy has a food fight with Scrooge and some of his friends in the dining car while trying to retrieve Know-It-All's ticket. When Billy gets left behind, Scrooge confronts him and taunts him. Scrooge throws soccer balls at Hero Boy, but he manages to defeat him and hit the brakes for Billy to get on.

Hero Boy manages to defeat Scrooge's minions and retrieve all the tickets. Scrooge becomes angry and steals the Hero Girl's ticket, which results in her being put in charge of driving the train. However, the Hero Boy finds the ticket and, with the help of the Hobo, gets to the locomotive by skiing down the mountain.

Later, Hero Boy and Hero Girl encounter the Scrooge puppet one more time while trying to return to the passenger cars. He has become very large and gained an opening in his chest that shows his heart. Hero Boy tries telling him that Christmas is not about toys, but he scoffs. Hero Boy has encouragement from the other children, so he defeats him by throwing snowballs at his heart and he disappears.

In the film, the Ebenezer Scrooge Puppet is just a non-sentient marionette that's being controlled by the Hobo and believes that Hero Boy doesn't believe in Christmas, like Scrooge himself. In the game, the Scrooge Puppet is a sentient being and is shown to be a very greedy, arrogant, mischievous and selfish toy who believes that toys are what make Christmas fun instead of Santa Claus. He is annoyed by the children believing in Santa and steals their tickets to prevent them from believing in him, so he can prevent them from reaching the North Pole. He also uses other toys on the train to prevent Hero Boy from retrieving the tickets and sadistically taunted him when Billy was being left behind, showing that he didn't really care about other kids. When Hero Boy retrieves the tickets, the Scrooge Puppet grows enormously to stop them from reaching the North Pole and refused to listen to Hero Boy convincing him that Christmas is about love and care instead of toys. 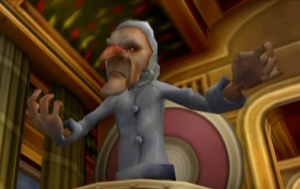 The Ebenezer Scrooge Puppet in the video game.

The Ebenezer Scrooge Puppet as a giant.