Start a Wiki
Ebidramon is a minor villain in Digimon Adventure 02, Digimon Tamers: Battle of Adventures, and Digimon Fusion.

Ebidramon first appeared under the control of the Dark Ring of the Digimon Emperor. He was defeated by Digmon, whether or not he died or survived.

During Christmas Eve, Digimon started to enter the real world. One of the was an Ebidramon that was in Austrailia. Ebidramon attacked an Austraillian DigiDestined named; Derek, along with with a Shellmon, and a Gesomon. They acted tough but they ran away when the DigiDestined said they were going to eat them.

Ebidramon was one the Digimon that invaded the Real World after the V-Pets attacked the network. He fought Terriermon and proved to be more than a match for the rabbit Digimon. But the tables quickly turned when Terriermon Digivolved into Gargomon. Ebidramon was then easily wiped out with a Bunny Pummel.

Neptunemon unleashed an Ebidramon to stop Shoutmon X2. He attempted to crush him with his pincers, but Mikey saved Shoutmon X2﻿ by summoning a Digimemory, Leviamon. Leviamon used his Rostrum attack to free Shoutmon X2 from Ebidramon. Then Shoutmon X2 killed Ebidramon with the Star Axe. 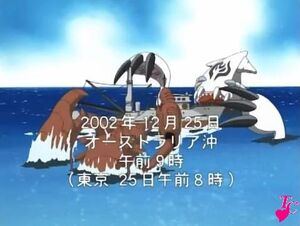 Retrieved from "https://villains.fandom.com/wiki/Ebidramon?oldid=3503318"
Community content is available under CC-BY-SA unless otherwise noted.