Ivan Evans, better known as Ebon, is one of the main antagonists of the Static Shock animated series, the other being Hotstreak. He the leader of the Meta-Breed and one of Static and Gears' arch enemies along with Hotstreak.

He was voiced by Gary Anthony Sturgis, who also voiced the Phantom Virus in Scooby Doo and the Cyber Chase and Trogaar in Teen Titans.

Even before becoming Ebon, Ivan had a lot of issues in his life, and after his father died, he acted as the "Man of the Family". He spent time in juvenile hall where he established himself as being in charge of his fellow inmates, many of which would later become Bang Babies. After the Big Bang, Ivan was transformed by the mutagenic gas into a living shadow. Taking the name Ebon, he then started a gang of Meta-Humans called the Meta Breed, which he sought to use to take control of Dakota. He attempted to recruit Static, but he refused and helped one of Ebon's new recruits, D-Struct, see the light and leave the Meta-Breed. Ebon attempted to send Static and D-Struct on a "one-way trip to oblivion" but Static managed to use Ebon's weakness towards light to drive him off.

Ebon later kidnapped his archenemy's friend, Richie, in order to make him release Talon, one of the Meta-Breed who was in jail, but this failed. Some time afterwards, Ebon's brother, Rubberband Man, foiled a number of Meta-Breed robberies, Ebon framed him for breaking the Meta-Breed out of prison to make him join, but his deception was revealed by Static.

Later, the shadow master followed Richie in an attempt to find out what his archenemy's secret identity was and kidnapped Virgil Hawkins in the belief that he and Static were one and the same person (which was correct). However, Richie managed to use his newly discovered super intelligence to save Virgil while at the same time making Ebon think that he had kidnapped the wrong person.

The shadow master later attempted to kidnap a meta-human called Nina Crocker, who had the power to control time. Static and Gear stopped him, but Ebon managed to steal a remote they had invented to control Nina's powers and in the following skirmish, the four were sent five years backwards in time to the Dakota gang riots. Ebon subdued Nina and stole a tanker truck full of Quantum Vapor, so as to create a new Big Bang, one that would be even bigger than the first and that would create even more Bang-Babies. However, Static and Gear stopped Ebon's plan and brought him back to the present.

Later Ebon was broken out of prison by Madelyn Spaulding, along with Talon and Hotstreak. She wanted them to work for her so as to take down Static. However, the master of shadows did not like taking orders from Madelyn, and the two fought for control. Although Ebon got the upper hand at first, he was soon knocked out by pieces of scrap metal that Madelyn tossed at him.

Ebon's next plan involved recruiting a group of Bang-Babies that were lethally sensitive to light, and whom had dubbed themselves the Night-Breed. Together, they planned to create a device called a Black-Out Box, which they could use to permanently block out the sun using the powers of one of the Night-Breed, Nightingale, who could control a lightproof substance called Dark Matter, so that he can block out light. However, the Night-Breed turned on Ebon and joined forces with Static and Gear to stop him.

Later, when a cure to the Quantum Vapor was dispersed throughout the city, Ebon and the Meta-Breed began losing their powers. However, they managed to steal a vial of the last of the mutagen gas and offered to let a number of other Bang-Babies have a whiff of it to get their powers back, but only if they recognized him as their leader. Hotstreak wanted to have all the power for himself and stole the vial, and Ebon pursued him. The two fought over it, accidentally releasing the gas in the process and, due to extreme over-exposure, mutating them into an enormous two-headed monster with fire and shadow powers. However, Static and Gear were exposed to it as well, regaining their powers, and took on the monster. They finally defeated it, but it may still be alive somewhere beneath the waters of the Dakota harbor.

Ebon is a transmorph, a living shadow with the ability to control shadows at will. He can slide on walls, go through cracks, and become an inter-dimensional portal to teleport himself or others anywhere. Ebon can also shape shift his physical body, capable of shaping himself any way he wants, much like his brother, Rubberband Man. However, he has two weaknesses: being harmed like a normal person (though his powers usually let him recover) and intense light, which weakens him. 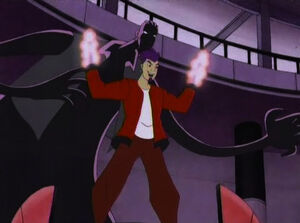 Ebon and Shiv at the Dakota Hills Mall.. 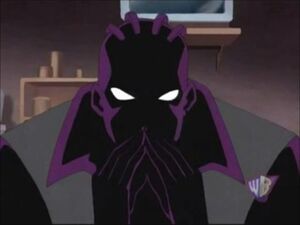 Ebon cooking up a plan.. 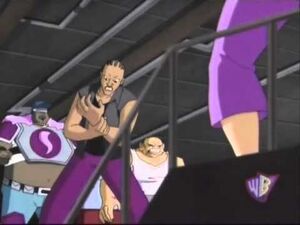 Ebon with his normal face
Add a photo to this gallery

Retrieved from "https://villains.fandom.com/wiki/Ebon?oldid=3423432"
Community content is available under CC-BY-SA unless otherwise noted.