Herald and second-in-command of the Black Order

Help Thanos obtain all of the Infinity Stones to complete the Infinity Gauntlet and wipe away half of the universe's populace (succeeded post-mortem).

He is the herald & second-in-command of the Black Order who (alongside Cull Obsidian, Proxima Midnight, and Corvus Glaive) assists Thanos in his quest to collect the Infinity Stones. With his powers and smarts, he is the biggest threat of the four.

He was portrayed by Tom Vaughan-Lawlor.

Ebony is a rather unattractive alien. He has grey, wrinkly skin, no hair on the top of his head, a very large nose with no visible nostrils and long bony fingers. He also possesses very large holes on the sides of his head, possibly from previous battles or is merely a trait of his species. His attire consists of black robe with a green necklace and rings on his fingers.

Of all the members of the Black Order, Ebony was the most prominent and was seen the most. Unlike some of Thanos' children, such as Gamora and Nebula, Ebony is utterly devoted towards Thanos, believing all of the genocide Thanos has committed is justice and an act of mercy in the grand scheme of things. His devotion to him is so strong, he has never failed him, and is willing to commit torture to be in his good graces.

He also displays utmost confidence in Thanos as well, as seen when Ebony stops Cull from intervening in the fight between Hulk and Thanos, saying to let Thanos have his fun. He has a very high view of himself and the rest of the Black Order, and snidely condescends his opponents and their weakness. Ebony Maw's most noteworthy act of devotion to Thanos was Maw bowing to Thanos just as Maw himself was about to disintegrate into dust.

However, despite his devotion to his father, he is the most ruthless of Thanos' army. He tortured Doctor Strange to get information, and even knocked Cull out of his way when they thought several of the Avengers in New York. This shows that he has little care about anyone but himself and his master. He also left Cull behind, so he could take Strange to the ship.

Ebony, while very powerful, doesn't rely on brute force. Unlike his siblings who show some level of skill, Maw is a mediocre fighter as he falls for simple tricks throughout his fight with Tony, Stephen, and Peter. This shows that Maw, while powerful, mostly lacks the skill to back it up. He did, however, outlast Stephen although this might be because he had been fighting for a much longer time.

Maw was first seen raiding the Asgardians' ship following the destruction of Asgard by the deceased Surtur. Along with his father and siblings, he slaughtered the Asgardians and tells them to rejoice in becoming children of Thanos, before Thanos is attacked by the Hulk. Although Obsidian intends to help Thanos, Maw tells him to stand down, knowing that Thanos is too strong for the Hulk to defeat. When the defeated Hulk is sent back to Earth by Hemidall (who ends up being killed by Thanos), Maw uses his powers to restrain Thor, making him watch Thanos forcing Loki to surrender the Space Stone (the Tesseract). It is also revealed that Maw was involved in his father's attack on the planet Zen-Whoberi along with the Chitauri, massacred half the Zehoberei population (including Gamora's family) and took in Gamora. After Thanos kills Loki, Maw escaped with his family as Thanos uses the Orb to destroy the Asgardians' ship, leaving a helpless Thor to drift in space.

With two of the Infinity Stones in place, Thanos sends the Black Order to Earth to collect the Time Stone (the Eye of Agamotto) and the Mind Stone while he personally travels to Knowhere to collect the Reality Stone (the Aether) from the Collector and Vormir to collect the Soul Stone from the Red Skull. Assigned to collect the Eye of Agamotto, Maw and Obsidian tracked down its current location in New York City, where they laid down an attack in to draw out Doctor Strange (the current holder of the Eye), also attracting Tony Stark, Wong, Bruce Banner (who had warned the group about Thanos) and Spider-Man. Despite the heroes' efforts, Maw managed to capture Strange and flies away on his ship, intending to deliver the Eye to Thanos at the planet Titan while Obsidian meets up with Proxima and Glaive to later attack Wakanda to get the Mind Stone.

Unknown to Maw, Tony and Spider-Man had snuck on-board to stop him and save Strange. Maw begins torturing Strange to force him to release the Time Stone, while Tony and Spider-Man come up with a plan, leading to Spider-Man asking Tony if he has ever seen the film Aliens. Tony soon confronts Maw, who arrogantly remarks that his abilities are superior to Tony's and he will kill him easily, although the latter states "yeah, but the kid has seen more movies" before blasting a hole in the ship. Maw is then sucked out into space (letting out a Wilhelm scream), where he freezes to death instantly while his ship crashes on Titan. His siblings would later meet the same fate along with their army of Outriders during the battle in Wakanda.

Upon arriving on Titan, Thanos swiftly deduced Maw was dead after seeing Doctor Strange free and waiting for him as he managed to collect the Time Stone after defeating the heroes in Titan. Despite not dwelling on it, he did show some sadness over his adopted son's death and appreciated that Ebony gave his life carrying his mission anyway by dragging Strange to Titan. Indeed, Maw leading Strange to Titan would prove vital to Thanos's victory, as after obtaining the Time Stone, he heads over to Earth to successfully collect the Mind Stone, which he recreates after Scarlet Witch destroys it with the Time Stone, allowing himself to use the Stones to wipe out half of the universe's populace (including several Avengers and Guardians), much to the surviving heroes' distraught.

Five years after Thanos' destruction of half of all life, the remaining Avengers and Guardians use the properties of the Quantum Realm to travel back to different points in time to collect the Infinity Stones and use them to undo Thanos' actions; however, due to the sensors of the past and future Nebula interfering, the past Nebula inadvertently reveals to Thanos that the future Nebula and War Machine are on Morag preparing to take the Power Stone. Thanos takes Nebula to Maw to be inspected, and by searching through her memories they learn that Thanos will ultimately succeed in his goal, much to his joy. However, Maw goes further into Nebula's memories, also revealing to them that Thanos will be killed and that the Avengers will still try to reverse his actions.

With this knowledge in mind, Thanos has the future Nebula abducted before she can return to the present and swaps the past Nebula (who is still loyal to him) in her place, allowing her to transport Thanos and his forces, Maw included, into the future; right after Hulk constructs and uses the Avengers' own Infinity Gauntlet to revive everyone who had been killed. Thanos proceeds to bomb the Avengers' headquarters and, after revealing his new plan to decimate the entire universe and the create a new universe in his image to Thor, Iron Man and Captain America before defeating them, unleashes his forces (including Maw and the rest of the Black Order, the Chitauri, the Outriders, and the Sakaaran Mercenaries) to destroy the remaining Avengers and ravage the earth. However, they are opposed by an army of the Avengers' revived allies, who battle Maw and the others as they try to get their hands on the Infinity Gauntlet.

Following a massive battle, Iron Man ultimately sacrifices himself by attaching the Infinity Stones to his armor and using their power to decimate Thanos and his armies. This resulted in a distraught Thanos watching Maw as he bowed to his master for the final time as a gesture of loyalty to his dying master before dying himself. 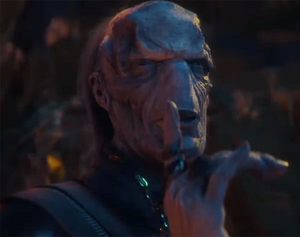 Maw with the Black Order and Loki, hearing Thanos' speech.

Thanos prepring to teleport Maw and the other Black Order members out of the Statesman.

Maw and the Black Order are teleported out of the Statesman. 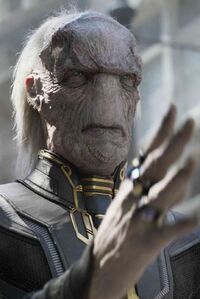 Ebony trying to take the Infinity Gauntlet from Black Panther. 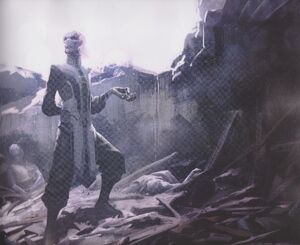