Cause havoc and destruction.

Bring about a perfect world of demons born from her plant-like progeny.

Echidna the She-Viper (エキドナ, Ekidona) is a large, flying snake/dragon based plant demoness and an antagonist from Devil May Cry 4.

In her serpentine form, she resembles a giant snake with a few feathery frills around the neck and multiple eyes on the head being the only difference between it's and a regular snake's appearance. However, the head "unzips" in four places down the head and this reveals Echidna as a humanoid female with glowing eyes and no lower body (or it is at least inside the snake portion) with a pair of red plumes on her head that combine to form the tongue of the snake, and can also be used as makeshift whips at close range.

She can lay egg-seeds as she does and scatters them all over the Mitis Forest within the island of Fortuna to act as hosts for further demons, with this she aims to create a world where demons would prosper through her plant-like progeny.

After Echidna emerged from one of the lesser Hell Gates, she began laying seed like eggs all over forest called the Mitis Forest outside the city of Fortuna, so as to act as hosts for more demons. Nero encounters her as he travels through the forest, trying to find a way to the Order of the Sword's headquarters. Upon arriving in the Valley of Ruin, Echidna ambushes him, though he escapes, only to be attacked by her again. This time, she tries to swallow Nero, though this proves unsuccessful and he defeats her. Though Nero tries to prevent her from escaping to the Hell Gate, she frees herself and is able to return to the Hell Gate.

Later, when Dante arrives in the forest, he finds Echidna laying more of her seed-eggs, which the half-demon kicks so that they slam into her. Furious, she tries to devour Dante but he escapes and battles her. After that, she cries out for her forest and her children then Dante fires Ivory at her, killing her. Dante then uses his newly acquired Devil Arm, Gilgamesh, to destroy the Hell Gate. Nero battles Echidna again inside the Savior.

Echidna is able to fly and combine the plumes on her head to form a snake tongue to use as a whip. Her main ability is the ability to lay seed like eggs, which hatch into demons called Chimeras, her "children". These creatures then seek out lesser demons to use as hosts, blooming and sprouting bladed tentacles to help defend its host. 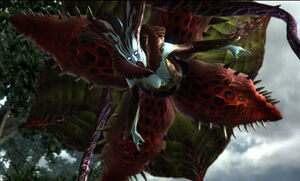