Soldier for the Black Arms

Telepathy with other Black Arms (including Shadow)

Looking after the Dark Arms.

Eclipse the Darkling is a villain from Archie's Sonic Universe series, appearing as the secondary antagonist of the Shadow Fall arc and then the main antagonist of the Total Eclipse arc. He is a member of the Black Arms race that was created by Black Death to destroy Shadow the Hedgehog.

Eclipse is a Black Arms alien soldier that is colored mostly gray with red stripes on his head and arms. Having black-colored sclerae with gold irises, he is somewhere about the size of Shadow the Hedgehog. That is until he uses his metamorphosis abilities to turn into his super form allowing him to grow about as large as Knuckles the Echidna from the Sonic Boom series.

Some time after the Black Arms' first attack on Sonic's World, Eclipse and Black Death headed to Sonic's World in via the New Black Comet, with Eclipse slowing them down due to a special experiment concerning entities referred to as "Dark Arms". When Team Dark - Shadow the Hedgehog, Rouge the Bat, E-123 Omega, and the Spider Troupe arrived at New Black Comet to destroy it with the Mjonir-Class Tactical Nuclear Warhead, Black Death spied them with his detached eye decided to use the Mobian team as "nourishment" for the small army, while Eclipse wanted Shadow eliminated from their plan. As Shadow then began engaging some Black Arms as he ventured further into the New Black Comet, Eclipse stopped him as he wanted him alive if possible. Eclipse then walks by and introduces himself to Shadow.

Eclipse attempts to convince Shadow to join them, but to no avail, so instead he enters his mind and attempts to take control. Shadow proves too much until Black Death arrives, combining his powers with Eclipse and taking control of Shadow. Eclipse and Shadow then lead a Black Arms team against Spider Troupe and Team Dark.

While Shadow fights Team Dark, Eclipse and his soldiers take care of Spider Troupe, the Spider Troupe prove to be able to handle the Black Arms while Eclipse talks with Black Death, but when Eclipse joins the battle he decimates Spider Troupe with little effort and then has his remaining soldiers transport them to the Dark Arms room as food for the soon to be born entities. Eclipse and a Black Oak leave with G.U.N.s Nuclear Weapon in order to launch it at their target and is contacted by Black Death who states that he is about to fight Shadow, who was freed from their control, and Eclipse must keep the nuke away from Rouge and Omega.

When Rouge and Omega find the nuke, Eclipse and a Black Oak ambush them, but they were ready. Omega attacks the Black Oak and easily knocks him over, and Eclipse mourns the loss. Omega toys with Eclipse, but Rouge says that they better leave and be done with it. But suddenly, Eclipse metamorphoses into a larger form and beats up Omega. Luckily for Team Dark, Eclipse tires out and reverts to his normal form, and Black Death decides to send Eclipse to Sonic's world with the Dark Arms eggs in a small rocket, and Eclipse screams that he wants to help but is tossed in by Death's Eye, and Death's Eye steers them to Sonic's world. When Shadow kills Black Death, Death's Eye falls limp, and Eclipse screams that his revenge will be terrible. In Sky Rail Zone, Knuckles witnesses the rocket, and assumes it's a shooting star.

Eclipse is fiercely loyal to his race and is willing to do whatever he can to make sure that they will not go on the verge of extinction; He is at times is playful in cruel ways and even at times mocks his foes while fighting them. He is the only one in Black Death's army to have a free will. Even though he was created to destroy Shadow the Hedgehog, he decided that it would be better if he can convince him to return to the Black Arms. He often refers to Shadow as 'brother' even though they were both created by two different masters.

While Eclipse is loyal to Black Death, he, at times, questions his orders or even tries to make the situations for the Dark Arms better. Sometimes it works, while other times it doesn't. Eclipse cares for no individual that isn't part of his species. He would rather them use them for the good of the Black Arms or just to rid them of their existence. All he wanted is to do right for his endangered race, even if it means destroying another to save it.

He holds a sense of responsibility and greatly cares for the hatching Dark Arms, despite the fact that they are a hive mind.

Eclipse has similar powers to Shadow, such as the Chaos Control - which he uses against Spider Troupe, and possess great intelligence. He can also communicate through the Black Arm hive mind. He also has brainwashing abilities, which can be augmented when used in conjunction with Black Death's. It is shown Eclipse can use metamorphosis in order to transform into a state with heightened durability in strength (enough to almost exhaust Omega), but it severely drains his energy - especially when used in heated combat. 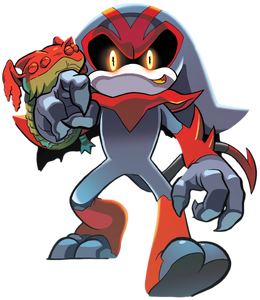 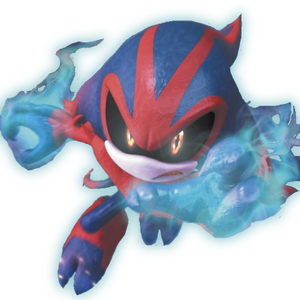 Concept art of Eclipse from the cover page of Sonic Universe#62. 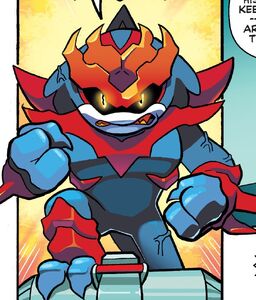 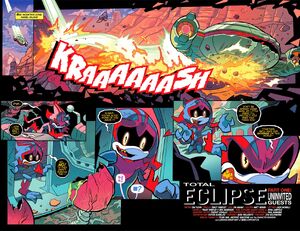 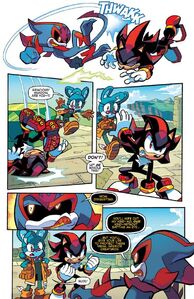 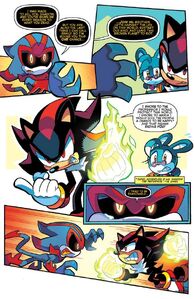 Eclipse once again fails to sway Shadow's allegiance from GUN and his friends.