The Ecto-Morphicons (Hornitor and Scorpitron) are Ivan Ooze's greatest weapons and the secondary villains in Mighty Morphin Power Rangers: The Movie and its videogame adaption on Sega Genesis. The Titans were both Exoskeleton like Insect machines. They were filled with Ivan's Ooze, an extension of himself. They got brought to life with his morphing lightning. They could shoot laser blasts.

The Hornitor machine was bipedal and was capable of firing bolts of destructive energy from its antennae, it was also capable of flight.

When Hornitor became possessed, he was easily morphed into Ivan Hornitor/Ectomorphicon. It made a sort of armor, increasing his size, strength, and giving space travel from it's insect wings.

Ecto-Morphicons are doomsday weapons in form of sentient, extra-terrestrial machines which curiously, seemingly themed after Earth lifeforms on the same vein with Rangers' Zords where in their case, hornet and scorpion. Although lacked actual armaments beside energy blasts, these monstrosities possess incredible strength and durability to the point that they can overpower Zords and can only be harmed by the most destructive of Zords' weaponry in Rangers' disposal. Moreover, their overall combat parameters appeared to relative with amount of Ooze in their systems; Scorpitron is significantly weakened as soon as Billy's Blue Wolf Ninjazord severed its tail, causing it to bleed its ooze reserves profusely and rendering it vulnerable to missiles of Tommy's White Ninja Falconzord. Conversely, Hornitor's combat parameters are drastically increased upon its merger with Ivan Ooze into Ivan Hornitor/Ectomorphicon or in the game adaptation's case, with both Ivan Ooze and parts of Scorpitron itself. As such, the Rangers are extremely lucky that they only face two of these monstrosities.

Ecto-Morphicons, along with their creator Ivan Ooze, were imprisoned by Zordon, Dulcea and the Order of Meridian (presumed predecessors to the modern-day Power Rangers) 6000 years prior to events of the film. Parts of these mechanical monstrosities are initially left undisturbed when the two intergalactic spellcasters Lord Zedd and Rita Repulsa freed Ivan Ooze from his prison to seek his aid in destroying Zordon. After betraying them, Ivan enslaved the adults of Angel Grove to dig up the massive machines.

By the time Ivan Ooze punished his tengu warriors with fatal lightning blasts for their failure in killing the de-powered Rangers, he, Goldar, and Mordant make a breakthrough in their search for Ecto-Morphicons where their slaves uncovered parts of Hornitor, with Ivan correctly deduced that Scorpitron is nearby somewhere. After reassembling his mantled creations, Ivan Ooze fills their systems with his ooze and bring them to life to wreak havoc upon Angel Grove as the beginning of his renewed reign of terror starting with Earth and its cities.

When the Power Rangers returned from acquiring both the Ninjetti fighting style from the Zordon's old ally Dulcea and the "Great Power" from the planet Phaedos' "Great Monolith", they use their new zords to attempt to neutralize it. Billy, the Blue Ranger, was able to use his Wolf Ninjazord to destroy Scorpitron's tail. Scorpitron was finally destroyed by Tommy, the White Ranger when he used his Zord's missiles to blow it into a thousand pieces.

Enraged, Ivan combined with Hornitor after Scorpitron's defeat and took on the rangers himself. Both Ivan and Hornitor were destroyed when the rangers lured him into space in their Megafalconzord. They put him into the path of Ryan's Comet which killed him and broke his sorcerous hold over the parents of Angel Grove.

In the Sega Genesis adaptation of Mighty Morphin Power Rangers: The Movie, both Ecto Morphicons appear as bosses. The final boss fight is against Ivan Ooze merged with Hornitor and the fusion is named Ivan Ecto Morphicon, Ivan Ecto-M for short. The fusion between the the two looks different then the movie; possessing four arms and a more insect like head whilst still incorporating Ivan's facial features.

In the Sega Game Gear version, the Scorpitron is no longer a fightable boss but it plays a more notable role in the climax where it, the Hornitron and Ivan Ooze all fuse together into one mecha; Scorpitron becoming an extra pair of arms. Scorpitron would seem to explain the Ivan Ecto Morphicon's different appearance in the sega adaptations.

The Ecto-Morphicons about to merge with Ivan in the Gamegear adaptation.

The fusion in the Gamegear version. 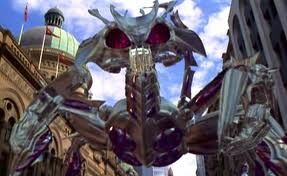 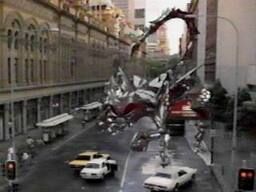 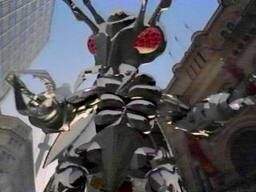 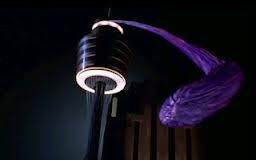 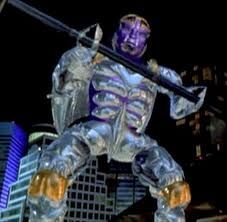 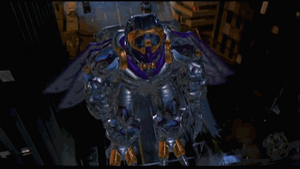 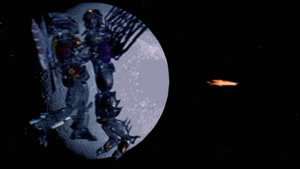 The Final Fight
Add a photo to this gallery

Retrieved from "https://villains.fandom.com/wiki/Ecto-Morphicons?oldid=4111561"
Community content is available under CC-BY-SA unless otherwise noted.