Spending time with his wife Bev.

To prove that he's the best neighbor on the block (constantly failed, formerly).

Edward "Ed" Bighead, also known as Mr. Bighead, is the main antagonist (sometimes an anti-hero) of Rocko's Modern Life and the secondary antagonist o the 2019 Netflix film Rocko's Modern Life: Static Cling. He is a cane toad who is Rocko's next-door neighbor (and sometimes his arch-nemesis), Bev's husband, and Ralph's father. He is also an employee at Conglom-O. He wants to prove that he is the best neighbor on the block. Occasionally, he also likes causing misery to Rocko, Spunky, Heffer, and Filburt, sometimes even going as far as actively trying to kill them.

He was voiced by Charlie Adler, who also played Gazeem in Disney's Aladdin, Snively in the Sonic the Hedgehog SatAM TV show, the Red Guy in Cow & Chicken, Panza in the 1996 animated film version of The Prince and the Pauper, Hamilton in Disney's Tarzan, Buck Huckster in Danger Rangers, I.R. Baboon in I Am Weasel, Hamburglar in The Wacky Adventures of Ronald McDonald and Starscream in the Transformers film series.

Ed is shown to be grouchy, bossy, petty, and exploitative, and corrupt, so he has a terrible temper. However, he does love his wife Bev, but also fears her, and his boss, Mr. Dupette. He is known to hate Rocko, Spunky, Heffer, and Filburt and has even attempted to either kill them or have them killed a few times. He yells at anyone he sees and grumbles bitterly under his breath at any situation he finds even slightly troubling. He originally had a bad relationship with his son, Ralph, because he didn't want to follow in his footsteps, but has since made amends with him when Ralph came to Ed and Bev's anniversary party. Ed's catchphrase is "I hate my life." whenever something bad happens to him. A lot of people don't like him except for Rocko. In Static Cling, Ed sees the error of his ways and becomes a better person as he becomes in better terms with Rocko and they finally grew to understand each other and become true friends after 20 years.

Ed has green skin, blue lips, has a few hairs on his head and usually wears a white shirt under brown dungarees and a black bow tie. 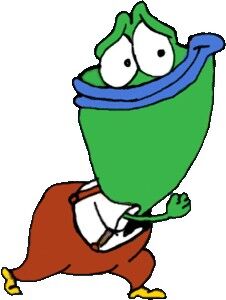 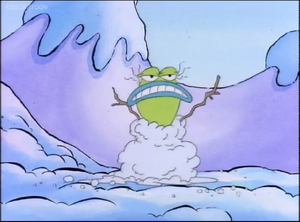 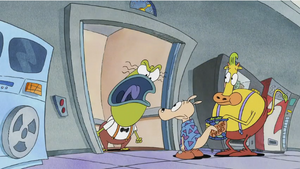 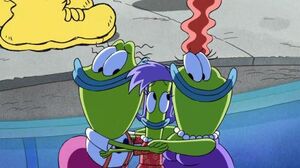 Ed's redemption
Add a photo to this gallery

Retrieved from "https://villains.fandom.com/wiki/Ed_Bighead?oldid=4279784"
Community content is available under CC-BY-SA unless otherwise noted.