Drinking
Beating his wife and daughter

Ed Peletier is a minor antagonist during the first half of season one of the The Walking Dead TV series.

He was portrayed by Adam Minarovich.

Ed Peletier was a violent and abusive man towards his wife Carol, and it was hinted that he had sexually abused his daughter Sophia. He dominated Carol by making her wear unattractive clothes and to keep her hair short, so that other men would not look at her.

One afternoon he had an argument with the women of the camp and struck Carol. Shane Walsh, who was watching from a distance, dragged Ed away and proceeded to savagely beat him. Shane warned Ed that if he ever put his hands on Carol, Sophia or anyone else in the camp, he would kill him. Later that evening, hiding in his tent recovering, Ed was eaten alive by a walker.

The next morning, after the attack on the camp, Carol took revenge on her deceased husband by smashing his head in with a pickaxe. 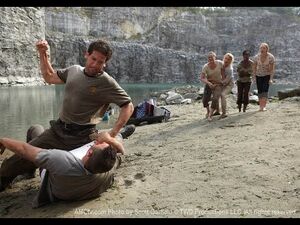 Ed being eaten alive by a walker, the first fatality of the Atlanta Camp attack.

Carol destroying Ed's head with a pickaxe as payback for years of abuse to her and Sophia.