Help Shaw hunt down the werewolf, Boog, Elliot, and the rest of the forest animals (failed).

Ed and Edna are the two secondary antagonists of Sony Pictures Animation's fouteenth feature film Open Season: Scared Silly. They are Shaw's old friends, hired by Shaw himself to help him kill all the animals, including the werewolf, Boog, and Elliot.

Ed and Edna are considered to be stupid, silly, loyal, dumb, goofy, weird, cranky, and loony.

Shaw, now a tour guide, witnesses an unseen creature in the forest and begs Gordy to allow open season and Shaw is determined to hunt down Boog and Elliot and catch the werewolf. To do so, he recruits his old friends Ed and Edna.

Later at the end, Shaw, Ed and Edna disguise themselves as werewolves to kill Boog, and Elliot and is defeated and arrested for impersonating a monster and creating a general panic, and Open Season is permanently shut down. 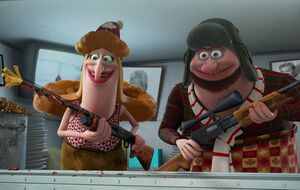 Ed and Edna getting ready to hunt.
Add a photo to this gallery

Retrieved from "https://villains.fandom.com/wiki/Ed_and_Edna?oldid=4298977"
Community content is available under CC-BY-SA unless otherwise noted.