Underboss of the Cabot Crime Family

Hanging with his father and friends.

Sort out the aftermath of the failed heist (both failed).

Edward "Nice Guy Eddie" Cabot is one of the two secondary antagonists (along with Victor Vega) in the 1992 crime film Reservoir Dogs. He is an aggressive mob underboss and the son of his crime boss Joe Cabot. Together with his father, Eddie leads a gang of armed robbers for a heist.

He was portrayed by the late Chris Penn, who also played Floyd in Beethoven's 2nd, Clive Cobb in Rush Hour and Eddie Pulaski in Grand Theft Auto: San Andreas.

Nice Guy Eddie Cabot is the son of crime boss Joe Cabot who plans a heist on a jewelry store with 6 other men. Out of the men Eddie and his family are friendly with are Mr. White and Mr. Blonde, the latter with whom Eddie appears to have a close friendship with.

After recruiting and giving the gang of men their color-coded nicknames, they head off for breakfast before the heist. However, the heist goes wrong when the cops show up earlier than anticipated and Mr. Blonde ends up killing several hostages in his homicidal rampage. One of the gang members, Mr. Pink, manages to get off with the stolen diamonds while Mr. White flees with Mr. Orange, though the latter who ends up getting shot in the stomach during a carjacking. Mr. Blonde also holds a cop Marvin Nash hostage to escape. The remaining members of the gang, Mr. Brown and Mr. Blue, are killed by the police in the ensuing circumstances of the botched robbery.

A while later, Eddie arrives at their hideout - a warehouse owned by his father - where Mr. White, Pink, Blonde, and a badly wounded Orange are waiting. Despite White, Pink, and White's theory that it was a set up due to the cops arriving prematurely, Eddie disregards this claim and blames their incompetence and Blonde shooting up the hostages for the reasoning for the heavy heat. Along with White and Pink, Eddie goes to get rid of the getaway cars parked outside to avoid attention, leaving Blonde behind with his cop hostage and an unconscious Orange in spite of White's objection.

After getting rid of the cars, the men arrive back to find Blonde dead from multiple gunshot wounds, and the cop badly injured after he was tortured and had his ear cut off by him. Furious at the situation which keeps getting ever more complicated and with the loss of his loyal friend, Eddie fatally shoots the captive cop. Orange claims that Mr. Blonde wanted to make off with the diamonds and planned to kill them all.

Although White and Pink believe the story, Eddie is not at all convinced due to Blonde's past loyalty with his family and he knows Blonde wouldn't betray them over some diamonds. As Eddie presses hard on Orange, Joe arrives at the warehouse (with a piece of news that Mr. Blue is dead) and tells them Mr. Orange is a cop. This causes conflict between all of them (except Mr. Pink who wants to remain professional). Joe points his gun at Orange, leading to White (who still believes Orange is innocent) pointing his gun at Joe and Eddie pointing his gun at White, creating a Mexican stand-off.

When Joe shoots Orange, White retaliates by shooting Joe, which leads to Eddie shooting White and in return getting shot by him, and is killed along with his father, leaving White and Orange badly injured while Mr. Pink (who hid under a ramp) grabs the diamonds and flees the scene.

Eddie is a playable character in the 2006 videogame adaption of the same name. He is not voiced by Chris Penn nor does he share any likeness with him. His signature move is the same as Mr. Pink's, only Eddie hits his hostage fewer times and with more force. When entering a bullet festival, Eddie cracks his knuckles.

He is voiced by Michael Cornacchia, who also voiced Candy in Driver: Parallel Lines. 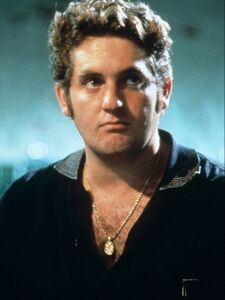 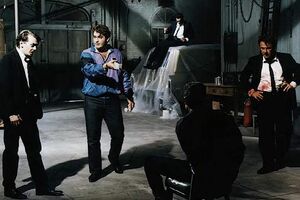