Kill those who judge his appearance.

Kill James Sunderland thinking he was "making fun" of him (failed).

Edward "Eddie" Dombrowski is the secondary antagonist of the hit 2001 survival-horror video game Silent Hill 2. He is an obese young man that James Sunderland, the protagonist, meets several times throughout the Fog World of Silent Hill.

He was voiced by David Schaufele in the original Silent Hill 2, and by Liam O'Brien in the Silent Hill HD Collection.

He had a troubled childhood, which included verbal abuse due to his weight throughout his entire education. Eddie didn't mind that girls weren't attracted to him but he despised being bullied. He remained civil until he snapped one day and shot a dog to death, as well as injuring its owner's knee who was bullying him even after Eddie's graduation. He became a fugitive and wandered for awhile, until he strayed close to the town of Silent Hill. His feelings of guilt caused him to be pulled into the town's Otherworld, where he was presented with a personal hell. The exact nature of this hell is unknown, but it is believed to be very cold and resemble a freezer with multiple bodies.

James first encounters him in Room 101 of Wood Side Apartments, surrounded by symbolism of his past crime, including a corpse with a mutialted knee inside the open fridge. Eddie, who is still relatively sane at this point, denies killing the man in the kitchen and admits that he saw some weird looking monsters. James tells him to be careful, and Eddie tells him likewise.

Eddie is next seen in Pete's Bowl-a-Rama bowling alley, conversing with a young girl named Laura while eating a pizza. She accuses him of being a "gutless fatso" due to the fact that he run away and is afraid of apologizing - but he remains civil to her and instead asks her if she had found a woman she was looking for - Mary. James, who enters the room just as Laura runs away, loses his temper and yells at Eddie for letting Laura wander off but he said that she will be fine on her own. This makes the dark part of Eddie suspect that James is making fun of him behind his back.

James next encounters Eddie in the cafeteria of Toluca Prison. Right mext to him is a body with its head blown off and a bloodied table. He also holds a large revolver in his hand. When questioned, Eddie shows clear signs of having come unhinged. He freely admits to having killed the corpse but defends his action that the killed one was making fun of him. When James starts getting concerned about Eddie and after he told him that he cannot kill people for such reason, Eddie then shrugs it off as a joke by adding that the corpse was there already when he got there, and leaves to explore the prison on his own.

Upon their next encounter in Labyrinth which takes place in a freezer that represents his cold attitute, Eddie is surrounded by dead bodies, and says he'll kill anyone who makes fun of him. Having been driven completely insane by his experience in Silent Hill fueled by his paranoia, Eddie attacks James with his gun believing that James was making fun of him behind his back ever since they met. After James wounds him, Eddie flees into the next room, which resembles a large meat locker. Eddie reveals to James his past, the fact he was bullied throughout his entire life, the fact he killed the dog and then shot his bully in the knee and then attacks him again. After a long fight, James kills Eddie in self defense. James' guilt over killing Eddie caused a second Pyramid Head to appear in the town.

Eddie wears an khaki shorts and a blue-and-white striped polo shirt, together with a cap turned backwards.

At first, Eddie seems to be just an normal and genuinely friendly young man. But later, he becomes insecure and mentally disturbed, revealing he was bullied and ridiculed throughout his entire life due to his appearance. Because of his experiences at school, Eddie developed a paranoia as he constantly believes that people are laughing at him behind his back even if they are trying to help him. Because of this he never trusts people completely and sees everyone as an enemy, this was demonstrated when he tried to kill James after he used one word that made him go berserk and accuse James of being just like the others. 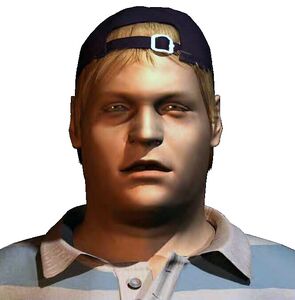