The Man Downstairs
The Thing Below

Find the "willing bride" and have children with him.

Countless acts of genital mutilation among other offenses

Eddie Gluskin, commonly known as "The Groom", is the secondary antagonist of the prequel-sequel horror game, Outlast: Whistleblower.

He was voiced by Graham Cuthbertson.

Not much is known about Eddie Gluskin, but according to documents that can be found in the game, Gluskin was sexually abused by his father and uncle as a child, causing him to suffer a sever psychotic break. As an attempt to cope with this experience, Gluskin began to claim that he was raised in a "Leave it to Beaver" home.

Before being committed to Mount Massive Asylum, he was a misogynistic and provocative serial killer who mutilated and murdered women. When interviewed and confronted with photos of his victims, Eddie refused to believe that they were dead and claimed that they were simply sleeping. He also similarly denied any abuse that took place during his childhood, however, when he was presented with photographic evidence, he responded with a startling mixture of laughter and anger, demonstrating that he developed a discomfort towards intimacy or anything else erotic. When forced to take part in Murkoff's experiments, he began having delusions of marriage and wanting children.

When the asylum riot began, there were no women in the asylum, so he captured other variants and brutally attempted to perform sex changes on them. The victims would die before the process was completed either during the surgery or killed by Eddie while he was driven further into his delusions. The procedure consisted of Eddie castrating his victims in order to turn them into "women" so he would be able to make them his "bride", with the addition of crudely adding breasts. Due to most, if not all of these procedures turning out unsuccessful, Eddie would either string his victims up in the gymnasium or decorate the vocational block with their mutilated corpses in extremely grotesque fashions.

Eddie Gluskin makes his first appearance at the start of the game in the Underground Lab, being forced against his will to enter one of the glass spheres in the lab to undergo painstaking restraint and experiments. Waylon Park is there working on one of the computers for debugging to allow the aforementioned experiment. Before Gluskin is finally restrained, he runs up to the glass begging for help, exclaiming that Waylon has the power to stop all of it.

Much later in the game, when Waylon is passing through the Drying Ground, he discovers an electric fence blocking his way. While searching for a power switch to shut off the electricity, he enters a building on the left and hears a voice on the other side screaming for help. Zooming in with camcorder reveals a grinning figure (Gluskin, unknown to Waylon at the time) standing in the hallway. He stops and stares at Waylon briefly, before vanishing from view.

After crashing through a roof into the Vocational Block's attic, Waylon finds himself hunted by Dennis, a patient diagnosed with multiple personality disorder who plots to capture Park and hand him over to the "The Groom" as one of his offerings in order to avoid becoming one of Gluskin's victims. Dennis eventually discovers him and a brief chase ensues. Waylon manages to escape by running out of the attic down to the third floor. Seeing this, Dennis' individual personalities proceed to mock and taunt him, one of them noting that he "delivered his own self to Gluskin's Hell."

Shortly afterward, Waylon attempts to open a door a locked door, only to be greeted by Eddie, who pushes his face against the glass while smiling. He is notably scarred and mentally unstable much like many variants, though to a much higher degree, as he has misogynistic fantasies and mutilates other men in ways to make some of them look like women, including genital mutilation - all in an attempt to create a "bride" for himself. Hence his label as "The Groom". During that time in the game, Gluskin pursues Waylon. Waylon jumps down an elevator shaft to escape him and gravely wounds his right leg while doing so (making him less mobile for the remainder of the game). With an injured leg and still attempting to escape Gluskin, Waylon attempts to hide in a locker, but Gluskin sees him entering, locks him inside, and drags the locker itself to another room which is a "workshop" for Eddie, where he brutally mutilates others.

Gluskin gasses the locker Waylon is inside of to "calm him down", causing him to pass out. Waylon wakes up 12 hours later and witnesses Gluskin cutting into other captive inmates through the slots of the locker door, before passing out again. Shortly afterward, Gluskin strips Waylon of all his clothes, places him on a table preparing to cut into him with a buzzsaw - with Waylon's body positioned to where his genitals are aimed at the buzzsaw. Just before the spinning buzzsaw reaches Waylon's body, he is saved at the last second when another prisoner intervenes and attacks Gluskin. In the scuffle, Gluskin's contraption falls apart, freeing Waylon. Once overpowered, the other inmate flees, pursued by Gluskin. Waylon uses the distraction as an opportunity to don his clothes, pick up his camcorder, and escape through a smashed window, the subsequent fall breaking his already-injured leg.

Despite escaping the block, he is forced head back in and find the key that unlocks the door leading into the asylum's Male Ward. Eddie resumes his pursuit of Waylon and eventually discovers him just as he picks up the key. Waylon manages to escape and heads back to the Male Ward's entrance. However, upon unlocking the door, he is ambushed by Gluskin, who beats him until he is unable to walk, before wrapping a noose around Waylon's neck while berating him for "betraying" him, and attempts to hang him on a pulley system. Waylon is able to fight back, and a struggle ensues. Waylon puts up enough resistance so that it causes a sudden a sudden weight shift in the pulley system, in which Waylon falls to the ground while Eddie gets tangled in his own ropes and pulled upward to be impaled on a hanging metal bar. A dying Eddie uses his last breath to grab Waylon's hand, and sadly choke out, "We could have been beautiful." Waylon falls down and lands on the ground, causing Eddie to be further impaled on the bar, killing him.

If Waylon films his dead body with the camcorder, he will express his hatred of him by saying he's "trying not to laugh" at this death in a note written to Lisa.

Gluskin can easily be seen as a deranged romanticist. He is very obsessed with the conception of obtaining the "perfect bride" and creating a line of children with his wife. He has an amorous vocabulary, normally referring to others by the term of endearment "darling". If angered, however, his choice of words becomes more derogatory and vulgar. Gluskin compares his lifelong quest and inability to find his soul mate with the song I Want a Girl, which he sings repeatedly.

Gluskin has something of a misleading and counterfeit personality. While he seemingly acts extremely charming and kind, something unexpected of a person of his large frame and disfigurements, his obsession and constant disappointments of finding his wife has made him incredibly violent to his failed "darlings". When his victims attempt to escape him, he becomes extremely abusive and insulting, dropping any sense of false affection and even more destructive, shouting that they betrayed him (as if they had no reason to whatsoever). His opinions of women have been thinly revealed through dialogue and it has been identified as misogyny. It is revealed that he used to be a serial killer who targeted and murdered only women before his incarceration. As there were no women incarcerated in the Asylum, Gluskin responds by abducting males instead and castrating them then replacing with female organs.

It is unclear to what extent his affection for his wives goes to. He does seem to have concern for their well-being, showing discontent when Waylon hurt himself but proceeded to leave him to die when he discovered he would rather be killed than be with Gluskin and showed some remorse over another of his victim's death but continued to throw him aside. If he did have a child, he vowed to treat them with love and become the father that he never had, as he sexually abused him while growing up.

Despite his insanity, originally at the beginning of the game, he was shown to be fully aware of what was happening to him and begs Waylon to stop all of it. 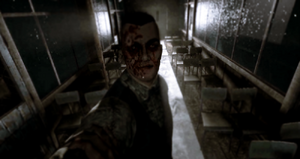 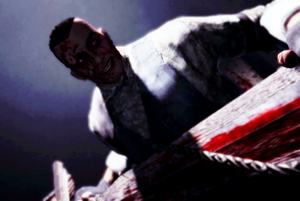 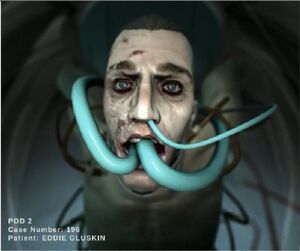 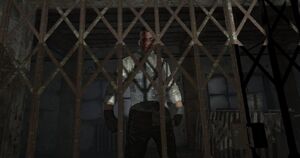 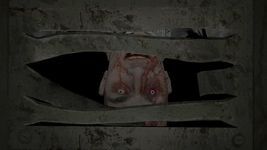