Police officer of the L.S.P.D.

Murdering and arresting others he sees a threat.

Aid Officer Tenpenny in his plans.

He was a police officer of the Los Santos Police Department and the co-leader of C.R.A.S.H., who is the personal right-hand man of Frank Tenpenny.

He was voiced by the late Chris Penn, who also played Eddie Cabot in Reservoir Dogs, Floyd in Beethoven's 2nd and Clive Cobb in Rush Hour.

Pulaski was once a non-corrupt cop before joining the C.R.A.S.H. unit under Frank Tenpenny's leadership; Tenpenny slowly manipulated Pulaski and turned him into a corrupt cop just like Tenpenny himself.

In 1992, during Hernandez's initiation in The Introduction, Pulaski joins Tenpenny in forcing the idealistic recruit to shoot Officer Ralph Pendelbury, their former partner (and would-be informant). Pulaski assisted Tenpenny in helping the Ballas run drugs into Los Santos. He is also present when the hit on CJ and Sweet Johnson's mother is called. Hernandez, who suffers constant harassment by his C.R.A.S.H. "partners", reports Tenpenny and Pulaski to Internal Affairs.

The three cops drive out to the desert ghost town of Las Brujas during the mission "High Noon" to collect the evidence the FBI compiled on them from CJ. Tenpenny hits Hernandez in the back of the head with a shovel the second he leaves the car, saying he sold them out. Tenpenny drives off, leaving Pulaski to hold CJ at gunpoint and force him to dig Hernandez's (and subsequently his own) grave.

CJ tries to reason with Pulaski and convince him that Tenpenny will kill him too in order to silence the last person who knows about his corruption, but Pulaski does not believe him and refuses to listen. Hernandez suddenly springs to life and tackles Pulaski in order to help Carl, but Pulaski quickly shoots him in the heart. Now only CJ and him, Pulaski runs to his car and drives away. When CJ chases after him, Pulaski tries to convince him that he only didn't kill him due Tenpenny's intervention and spews vile statements about CJ's mother and sister, the latter of whom Pulaski admits to have liked and photographed along her boyfriend Cesar Vialpando as "two horny chihuahas".

Enraged, CJ runs Pulaski's car off the road and mortally wounds him. In his final moments, CJ asks "any last requests?". Pulaski asks CJ "Can I f*ck your sister?", to which CJ retorts "You're an asshole to the end" and kills him by a stomp to the head, avenging Hernandez's death. Though this is the canon outcome of Pulaski's death, Carl can also knock his car off the highway into the sea, where Pulaski ends up drowning upon exiting from his car, thus omitting his death cutscene.

Later when Tenpenny is mentioned getting into court where he along with Pulaski himself were charged with several offenses it is mentioned on the news that Pulaski along with Jimmy Hernandez were believed to be on the run when in fact Pulaski and Hernandez are both dead eventually the charges against Tenpenny are dropped triggering a riot in Los Santos. When CJ confronts Big Smoke in his hideout, the latter reveals he wants nothing to do with Tenpenny or Pulaski and refers the latter as Tenpenny's "Polish lap dog". Shortly after Big Smoke's death and before Tenpenny's own, Tenpenny remarks that he knows that Carl killed Pulaski and shows no pity for his most loyal subordinate's death, demonstrating that Carl's warnings to Pulaski were right: Pulaski never meant anything to Tenpenny.

Pulaski is a violent and trigger-happy thug. While Tenpenny is depicted as a megalomaniac who lacks a conscience, Pulaski is merely a degenerative, ignorant thrill-seeker and a corrupt officer that is arrogant, callous, vicious, and sadistic. There is little to suggest that Pulaski ever thinks for himself or has insight into the events surrounding him.

He is a racist and joins his partner in calling officer Hernandez racial slurs. However, he always respects Tenpenny and tries to be like him.

Pulaski, fully indoctrinated into Tenpenny's approach to police work, has a high level of deluded trust in the man and considers him a close friend. He is the only character Pulaski actually seems to respect. However, Tenpenny measures people only by how useful they are to him, and Pulaski is useful so long as he helped Tenpenny cover his back. In "The Introduction" Pulaski calls Tenpenny "pal", to which Tenpenny says, "Pal?! I'm your superior officer and don't you forget that shit!", indicating that he treats Pulaski as nothing but a partner in crime or a servant. Pulaski also shares Tenpenny's belief that CJ and people like him are at best useful idiots and at worst less than human. 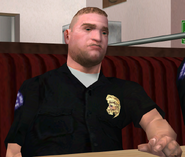