Matthew McGee (according to an interview with creator Danny Antonucci)

Beat up Eddy and his friends (succeeded, but then failed).

He was voiced by Terry Klassen.

He has a deep, smooth voice and a room that Eddy hopes to inherit and reside in. His room is complete with a car and all kinds of memorabilia and strange items. For example, he owns a pet snake, a giant dusty taxidermy camel, a brick-covered window, a bed that folds-up into the fridge, and a (now broken) trophy (unknown for what, but it might be chewing ice cubes, because Eddy said before Ed saw the trophy that he was a whiz at chewing ice cubes); however in Ed, Edd n Eddy's Big Picture Show it is seen on the floor unbroken.

He is probably over 18 as he lives on his own in a trailer and looks as though he has finished maturing. He may have a kinship with the Kanker Sisters, as he was able to set Eddy up to go to their trailer for a prank, but this is unlikely because the Kankers moved in after Eddy's brother was gone. He also tries to scam everyone similar to Eddy, but much more successfully. His room is guarded by a chained lock, pieces of wood nailed to the wall and a falling safe, along with the fact that it was camouflaged to blend in with the rest of the wall. The door to his room is hidden behind wallpaper for some reason.In some of the early seasons, many fans didn't think he was real until his first actual appearence.

Eddy's Brother wears a red plaid jacket and a tweed cap. He also has some hairs on his rather large chin and he also has three hairs sticking out from the back of his head just like Eddy. He resides in the costal theme park Mondo A-Go Go in a trailer (Eddy's Brother's Trailer).

He has his first and only appearance in Ed, Edd n Eddy's Big Picture Show. He is one of the few people whom Kevin probably fears, because of his strength and due to the stories Kevin has heard about him.

Although a major antagonist, Eddy's Brother actually appeared only for a brief period of time in the movie itself and was originally playing to Eddy's original stories of being benevolent and protective of his little brother. Throughout the movie, reaching him is the set goal after what Eddy calls his greatest scam goes very, very horribly wrong, resulting in the total destruction of the lane and severely injuring many of the other kids in the Cul-de-Sac, who attempt to catch the Eds and get their revenge before they can reach him, as to keep themselves out of danger. When reached, Eddy's brother decided to help and offer protection, however, he quickly demanded that he and Eddy "play uncle" first and twisted Eddy's leg around painfully.

Edd was horrified while the Kankers became angered- the other kids also seemed upset (especially Ed, who was too horror stricken to do much of anything): after Eddy's Brother began to violently smash Eddy against the door of his trailer (shown in a very violent light, even for the show's cartoonish standards), Edd decided to confront him, only to be beaten by the much larger man.

This made Ed even more horrified and the other children rose against Eddy's Brother in an effort to protect Eddy- however, he was far too strong for them to take down without risk of injury. Luckily, Ed (in a rare moment of creativeness) finally had enough and pulled out one of the bolts holding the door to the trailer.

The door proceeded to catapult out and slammed into Eddy's Brother face, knocking the brute out- his only in response word being "uncle."

It is then revealed that Eddy's entire attitude was made simply to make others like him, namely his brother, and his brother treating him so coldly after so long left Eddy devestated enough to show a very rare sign of humiliation and self-pity. This was enough to give him everyone's sympathy and he and the other Eds are invited over Kevin's house for jawbreakers.

While the other kids celebrated their victory, the Kanker Sisters dragged Eddy's Brother away to an unknown fate (Lee stating that the first one inside got to give him "mouth-to-mouth"), likely implying that they are going to harass him.

There have been clues about Eddy's older brother throughout the show, showing him to be somewhere on the borderline of prankster and sociopath: in season one's "Fool on the Ed", we learn that Eddy's brother showed him how to make the special-recipe for the El Mongo Stink Bomb "before he went away" and, in season two, there's a glimpse of a picture on Eddy's wall- 2 boyish silhouettes, one bigger than the other. The biggest clue lies in the episode "Ed in a Halfshell", where Eddy sets himself the task of making Jimmy his protégé and it is learned that Eddy was himself molded in just this way by his older brother (thus leaving the Easter egg for the big revelation in the film).

Season three provides an abundance of brotherly details, starting with the episode "O-Ed Eleven" where we get to see hallowed ground- Eddy's brother's room. The decor is just as unique, yet much more bizarre than Eddy's room and gives hints towards how multifaceted he appears- from bouzouki playing to bricklaying, from chewing ice cubes to ticking off Eddy, his big brother has a lot of unknown tales to be told. In the episode "An Ed is Born", Eddy gets a care package that shows just what his brother thinks of his baby brother (a giant package filled with baby-oriented material, from diapers to pacifiers, showing the lack of respect his brother has for him) and perhaps Eddy's "No more beating up little Eddy!" comment at the end gives us a pretty good idea of just where he got that knack for shoving around his pals. Although before this point we only see Eddy's thoughts of his brother, viewers do not get to see other kids reaction towards him until the infamous stir caused by rumors of his return in the episode "Ed, Pass it On". Not since the Kankers went on their latest hissy fit had the whole neighborhood been in such an uproar– Rolf digs a moat and knits a very special offertory vest to protect his chickens, Nazz gleams at the prospect of having someone as "rad" as Eddy's brother to hang with, and even the cynical jock Kevin disintegrates into a groveling coward as he ponders the implications of Big Brother's return (treating Eddy nicely and spoiling him with all his demands in order to keep from Eddy telling his brother of anything Kevin has caused).

In Ed, Edd n Eddy's Big Picture Show, after Edd analyzes all of stories Eddy has told him of his brother, Edd comes to the conclusion that Eddy's Brother is a manipulative prankster and a slacker. However, during the end of the movie, Eddy's Brother's true colors are revealed. He makes fun of Edd by calling him Eddy's girlfriend and then proceeds to bully Eddy, continuing the stereotypical dysfunctional older brother/younger brother relationship, although it must be noted that his beatdown, though cartoonish in several ways, shows that he is a very sadistic person, playing "Uncle" only as an excuse to hurt his little brother, with signs of having severely injured Eddy. However, this ends when Ed pulls out a hinge that is barely holding onto Eddy's Brother's trailer and it ends up slamming him in the face (with Eddy still clinging to the door in fear) and knocking him out cold. 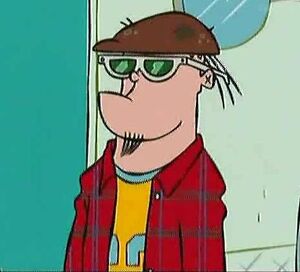 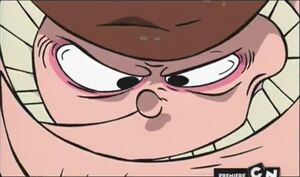 The evil grin of Eddy's brother 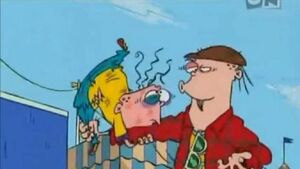 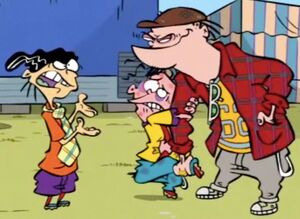 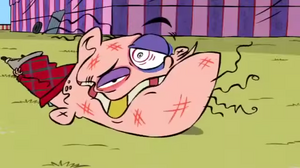 Eddy's Brother's defeat.
Add a photo to this gallery

This character's use in the finale of Ed, Edd n Eddy has frequently been commended by fans as a fitting climax for the series, not only because the confrontation with him provides an in–story means for Eddy to be redeemed in the eyes of his peers, but because he is the first and only fully–seen, fully–voiced character in the series outside of the twelve regulars. Ed, Edd n Eddy, throughout its entire run, had notably never shown any additional human beings outside of the core cast, and saving doing so for the climax of its finale made the impact of Eddy's Brother, who furthermore had been "built up" in several previous episodes, all that greater.

Retrieved from "https://villains.fandom.com/wiki/Eddy%27s_Brother?oldid=3333791"
Community content is available under CC-BY-SA unless otherwise noted.