Destroy the world to create a new world of Rinne.

Eden is an superorgan and the secondary antagonist in Date A Live: Rinne Utopia. It is the main Angel who serve the Spirit Rinne Sonogami.

Eden just appears at the end of the game. Despite the giant power of Eden, it was destroyed by the other Spirits that were sealed by Shido Itsuka. However, when Rinne was sealed by Shido, Eden was defeated too, the life of Sonogami also is already reaching the end, the fact that Spirits need their angels within themselves to keep alive and intact in reality. When Eden was destroyed, Rinne also lost her life, destroying her dreams to rediscover the love of her life and leaving Shido crying while Rinne disappeared from reality.

The story of Eden echoes the Mesopotamian myth of a king, as a primordial man, who is placed in a divine garden to guard the tree of life. In the Hebrew Bible, Adam and Eve are depicted as walking around the Garden of Eden naked due to their innocence. Eden and its rivers may signify the real Jerusalem, the Temple of Solomon, or the Promised Land. It may also represent the divine garden on Zion, and the mountain of God, which was also Jerusalem. The imagery of the Garden, with its serpent and cherubs, has been compared to the images of the Solomonic Temple with its copper serpent, the nehushtan, and guardian cherubs. 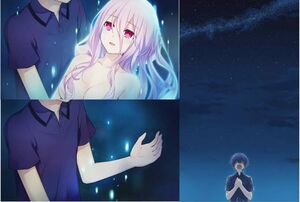