Take over the world of amusement

Edgar Ektor is the main antagonist of the Aero the Acrobat series and evil clown industrialist leading a powerful anti-amusement empire to destroy all amusement in the world. He was Zero's master until becoming his enemy, too.

Ektor was a rich, spoiled and devious boy who had a love for attending the circus, but he was banished because of his dangerous prank in which a falling weight almost killed a lion. He thus swore revenge against the World of Amusement and arranged for his parents to die in a car crash so that he would receive his inheritance.

Twenty years later, despite having become a wealthy and powerful industrialist through the use of his inheritance, Ektor remained a bitter man twisted by his grudges from the past.

Ektor initiated his plan against the World of Amusement Circus and Funpark, attacking it with his henchmen, the "Psycho Circus Gang," as Aero the Acro-Bat was about to perform a trapeze stunt. Declaring the circus "null and void," Ektor had his men abduct all the performers aside from Aero, including Aero's girlfriend Aeriel. He also enlisted the aid of Zero the Kamikaze Squirrel, a rival performer to Aero.

After Aero defeated Ektor's men in the circus, led by the Stilt Brothers., Ektor sent Zero to stop him in the adjoining Funpark using Mr. Bubbles, a clown head mecha of Zero's creation. This proved ineffective, and Zero retreated to Ektor's Museum of Horrors where the two started developing their next weapon. By the time Aero reached the pair in Ektor's domain, they had completed the weapon - a clown head-themed flying machine co-piloted by Ektor and Zero - and deployed it in a long battle that ultimately reached the top of the Museum. Aero ultimately destroyed it, and although Ektor jumped out of it before it fell from the museum bridge, Aero sent him falling with a drill attack. After hearing a loud crash, Aero celebrated the seeming demise of his nemesis, unaware that Zero had flown after Ektor to try and rescue him.

At the beginning of Aero the Acro-Bat 2, it is revealed that Ektor was indeed saved by Zero; the crash was his flying machine hitting the ground. Ektor orders Zero to initiate "Plan B," then goes into hiding as his spy Batasha lures Aero on an adventure by intercepting him at the Bell Castle and convincing him to save her from Boris the Beast. He also assigns Dr. Dis to create a clone of Aero with Batasha's aid.

After defeating Dr. Dis's clone, Aero learns from the scientist that Plan B involves circus performers being imprisoned in the Performer's Dungeon. Aero travels to the dungeon and rescues his associates, the Flying Pepperoni's, who inform him of Ektor's return and warn him that Zero is building an unknown machine as part of Plan B. Near the dungeon, Aero finds Ektor, who reveals that the entire plot was simply for Batasha and Dr. Dis to waste Aero's time until Zero completed his greatest invention: the Ektor Engine, a heavily weaponized train that Ektor will drive to all of the world's circuses, allowing his men to conquer them. Ektor traps Aero on the train as it departs and forces him to navigate a gauntlet of henchmen and weapons. At the front of the train, Ektor finally engages Aero directly, and is thrown from the train after a long and difficult battle.

In the aftermath, the Ektor Engine is destroyed and Ektor is forced into exile. His last whereabouts are noted to be an island off the coast of America, where he is developing a new and supposedly foolproof plan.

Betraying by his Pawn

Shortly after the destruction of the Ektor Engine, Zero receives a letter from his girlfriend Amy informing him that an evil lumberjack, Jacques Le Sheets, is destroying their homeland of Stony Forest so he can use the wood to print counterfeit money. Ektor warns Zero not to travel there, but Zero disregards this and leaves for Stony Forest anyway.

Later, after Zero defeats Le Sheets, Ektor suddenly appears and abducts Amy, revealing himself to be the mastermind behind the plot. Zero frees Amy and battles Ektor aboard his ship, ultimately defeating his former master. Zero then parachutes from the ship with Amy as it crashes, seemingly putting an end to Ektor and his schemes once and for all.

In Aero the Acro-Bat, Ektor is not shown to possess any special powers, instead relying upon his henchmen and the machines created by Zero for combat. However, in Aero the Acro-Bat 2, Ektor has a number of new abilities. These include teleportation magic he uses to shuffle the objects under the cups in the Ektor's Deal bonus game and greater proficiency in direct combat, using moves such as tackles and body slams. He augments these abilities with the power to heal damage he suffers and traditional weaponry such as bombs.

His powers have grown further by the events of Zero the Kamikaze Squirrel. In addition to his bombs and recovery, his magic now allows him to teleport himself, launch plasma blasts, and deploy protective shields to bolster his defense. 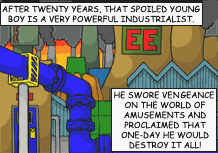 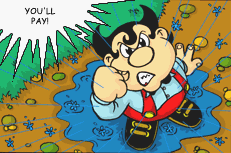 Ektor as a child.

Ektor in Aero the Acrobat 2. 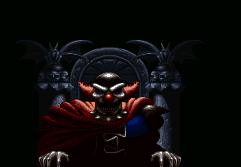 Ektor on his throne.

Ektor in Zero the Kamikaze Squirrel.