Villains Wiki
Register
Don't have an account?
Sign In
Advertisement
in: Mature, Date A Live Villains, Male,
and 37 more

The Head of Ashcroft Project

Edgar F. Caroll is the secondary antagonist in the Date A Live spinoff Date AST Like, also known as Date A Strike. He is one of scientists working for Deus.Ex.Machina Industries and is the leader of the Ashcroft Project. He has a cruel personality, who do not choose the means to that end, to come up with the concept of human magical device pairs event dedicated to the body "Ashcroft", and began to develop.

Edgar F. Carroll is one of the best scientists on Deus.Ex.Machina Industries. Isaac Ray Peram Westcott has used the DEM Industries Research Center in Great Britain with the purpose of creating the most powerful Combat Realizer Units in the world. Isaac Westcott placed Edgar as the leader, and put trusts in him. However, Edgar did not follow the advice of Westcott and secretly worked on how to create a "monster" in Artemisia Bell Ashcroft. However, Edgar needed Artemisia's body for this, so he hired Minerva Liddell to go to Japan and retrieve Artemisia or to capture te Ashcroft Units created by Torataro Okamine and the Okamine Heavy Industries that were hacked and stolen by 3 former SSS Wizards, Ashley Sinclair, Leonora Sears and Cecil O'Brien.

In a way, the plans of Edgar were a success and a "monster" was created by Okamine Heavy Industries within Artemisia, the monster was called Ashcroft Assembly. Ashcroft Assembly aroused because the desperation in Artemisia caused by Minerva Liddell when she was about to kill Cecil in front of Artemisia.

However, due to Minerva's sudden betrayal and demise, Edgar's plans failed. In some ways, this plan came up Westcott. After Westcott had discovered the Edgar's plans, he was up to Research Center. Edgar was yelling in anger and frustration when he heard Westcott's voice. He turned back and felt surprised that Westcott had arrived. After Westcott arrived in his office and told Edgar that he would like to take his head, due to he recently awared of Ashcroft series, Edgar was horrified and pledged Westcott to spare his life. He falsely said his plan was made for both Westcott's and Deux.Ex.Machina Industries' goods while desperatly thinking about how to survive the ordeal.

Westcott tried to make another cruel joke with the situation, so he seemingly forgave and spared Edgar. Edgar smiled in relief when Ellen Mira Mathers beheaded Edgar in all of a sudden, just as Westcott ordered. When Edgar's head rolled to the ground, Westcott smiled calmly while looking at the gory scene, saying it was such a shame for Edgar as he explaining and begging for forgiveness quite so desperately and cowardly. 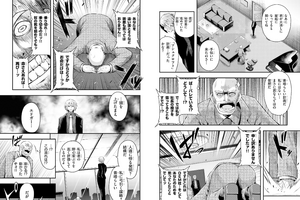 Edgar begs for his life to Isaac Westcott 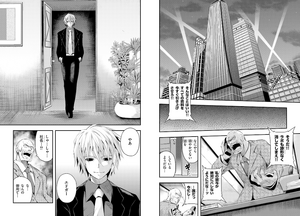 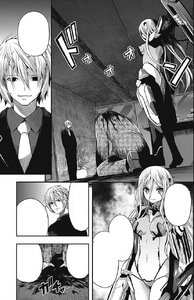 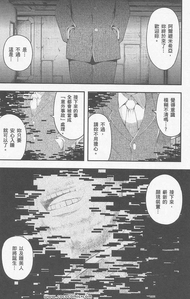 Edgar F. Caroll after making Artemisia falls into a coma 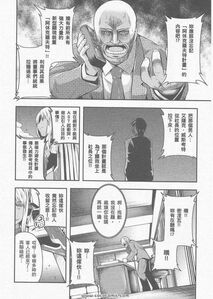 Edgar warns Minerva to do nothing too flashy to attract Westcott's attention, but was angry that Minerva ignored him. 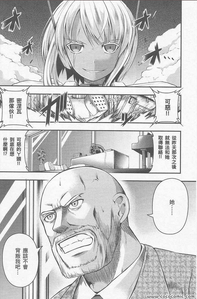