Director of the Bureau of Investigation

Fishing.
Reminding John Marston who is in charge.

For the first three chapters, Ross is actually an ally since he actually does helps Marston in capturing his last target, while at the same time forcing him to do his dirty work.

In the fourth and final chapter, Ross finally betrays John after the latter killed all of his targets, assaulting John's ranch and killing John himself. However, Jack and Abigail Marston survive, and in the Stranger side-mission "Remember my Family" Ross is hunted down by an older Jack (3 years after John's death) and killed in a duel, avenging John while at the same time making John's sacrifice in vain.

He was voiced by Jim Bentley.

Ross is a purveyor of modernism and plays a strong role in both the narratives and themes of Red Dead Redemption. Ross, although older than Marston, chooses to ride in automobiles and use automatic weapons. Through dialogue, Ross advocates federalism and acknowledges the hypocrisy of his methods as necessary. Ross is portrayed as indifferent, unscrupulous, and sometimes even jubilant when at his most inequitable.

During the late 1890s, Ross was a Pinkerton agent who served as the partner of Andrew Milton.

Twelve years later, Ross has Marston's family held away from Marston in order to strong-arm him into hunting down Bill Williamson.

He sends John Marston, the main protagonist in the game, to kill all his former gang members by kidnapping his wife and son and keeping them hostage. After John has killed or captured his two former friends/members, Ross still won't take him to his family until John gets rid of Dutch Van Der Linde. After John has finally killed Dutch, Ross finally lets John go to his family.

After John has spent some time on his ranch, Ross is revealed to have betrayed John by sending in the army on an assault on his farm, killing John's friend Uncle. John pulls out a revolver and shoots the most he can and sacrifices himself so that his family could have a better life, realizing what Ross wants is his death and not the death of his family. Ross lights a cigar and watches John take his last breath until he finally collapses on the ground. Ross then gets all the credit for what John Marston did and receives a chest full of medals, and John is mentioned as one of the criminals involved.

Three years later, John's son, Jack, has become a gunslinger and goes to get revenge on Ross. Ross retired about a year ago and now lives at Lake Don Julio with his wife. Jack approaches Ross' wife, Emily, who tells him that Ross is hunting with his brother Phil, so he rides to Mexico where he finally finds Ross duck hunting. Jack confronts Ross about his father and Ross shows no remorse for having betrayed and killed John and even threatens to kill Jack as well. Jack Marston refuses to go and Ross challenges him to a duel. Jack wins the duel, finally killing Ross but this makes him a murderer, something that his father tried to avoid Jack from becoming. Ross' body floats in the river, Jack walks away and the credits start.

Ross is gunned down, a long-running theme of hypocrisy in the actions of Ross are ironically concluded, recalling the statement that "...Everyone will eventually pay for what they've done". Ross paid the price for murdering John. Ross became a victim of revenge and died as a murderer. 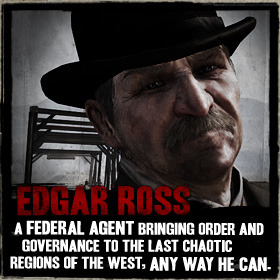