No information
Edgar Wakefield is an antagonist in the Dishonored DLC The Brigmore Witches. He is a member of the Dead Eels gang and the treacherous second-in-commandant to the gang leader Lizzie Stride. 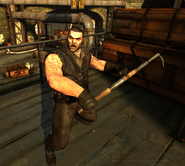 Wakefield is killed by Daud