Vast reality-warping powers on a par with Eternity itself

"Clean" the universe via reverting it back to a Cosmic Egg, which he then planned to use as a decoration.

Edifice Rex is an extremely powerful ascended human from Marvel Comics who after being exposed to a mysterious orb, was transformed into a colossal cosmic entity with powers on a par with entities such as Eternity itself.

While a comedy-centric antagonist Edifice Rex would prove to be a threat that made many of Marvel's cosmic entities extremely concerned (save for Master Order) due to his insane decision to "clean" the universe via reverting everything back to the way it was prior to the Big Bang, effectively trapping all of reality inside a Cosmic Egg (which he then planned on keeping as a decoration).

Rex was originally a member of Damage Control and was obsessed with order and cleaning, one day while cleaning up the aftermath of a giant-robot battle he would pick up a mysterious glowing orb, against the orders of his superior : transforming him into a cosmic entity in the process with an imposing physique and vast reality-altering capabilities.

soon after obtaining his powers Rex became unhinged and started to "clean" a local stadium, including trapping the New Warriors in force-fields when they tried to stop his alterations to reality, in order to try and stall the reality-warping madman his superior had him go off-world to "clean up" an asteroid belt, hoping it would at least give them time to think of a means to deal with him.

after realizing he could "clean" the asteroid belt near-instantly Ed promptly did so and returned to Earth, he had grown in power and began to see the universe in its entirety as "messy" and thus decided he was going to permanently "fix" reality, via making it into a Cosmic Egg, which he would then place on a shelf (implying he was multiversal in scale, or simply deranged).

The cosmic entities of his reality summoned him and tried to make him see reason but he defied them all, even going as far as challenging Galactus - the only entity that supported Rex's plan was Master Order.

While many of the cosmic entities were extremely relucant to deal with Ed it was ultimately Galactus who saved reality via having Silver Surfer obtain the only people who could defeat Rex - namely his former employers, who realized he was still doing (in his mind's eye) his "job" : thus they promptly "fired" him, causing him to somehow lose his abilities (or more likely simply lose interest in using them).. he would later ask his employers for a good reference but was told to sign for unemployment.

Edifice Rex has immense cosmic power on a par with Eternity, he is sufficiently advanced that even Galactus and a good number of other Marvel cosmic entities are wary of him.

However, he is vastly below the power of a being such as Beyonder (prior to Beyonder's retcon).

To give a basic understanding of Rex's potential power Eternity is, roughly, a conceptual mega-being that has the combined power of all living things in the Marvel universe (but not the multiverse) - thus Rex is at least as powerful as a universe onto himself.

This ranks him high among the "universal powers" such as Eternity, Galactus and so on - who exist in a single universe but below the level of multiversal beings such as the Phoenix Force, who exist in multiple universes.

The major entities of his native universe feared waging an attack against him out of concerns that in doing so they would cause more damage (and possibly invoke the wrath of even stronger entities in the process) - ultimately it was shown that Rex's own mind is his weakness, since he promptly ceased to use any of his powers after being "fired" from Damage Control, meaning that for all his power Rex was still limited in his mindset and was simply doing his "job". 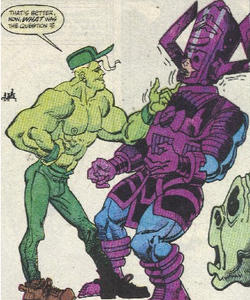 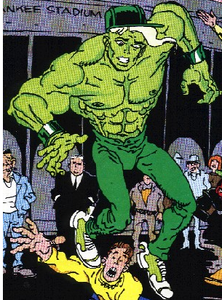 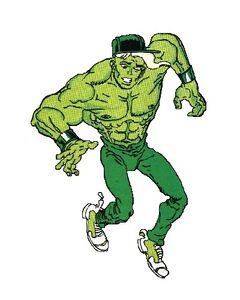 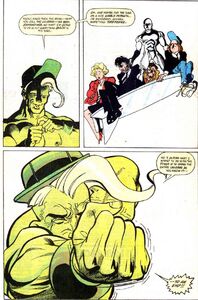 Edifice Rex reveals his true plan - to destroy the universe itself.
Add a photo to this gallery

Retrieved from "https://villains.fandom.com/wiki/Edifice_Rex?oldid=3765767"
Community content is available under CC-BY-SA unless otherwise noted.