Prince of England, Lord, Butler and Captain of the British Army

Be remembered when he is dead, to have books written about him, to have songs sung about him, and hundreds of years in the future to have episodes of his life to be played out weekly at half past nine by some great heroic actor of the age.

Edmund Blackadder is the name given to several characters all being the main protagonist of the BBC franchise Blackadder, although he is the titular "hero" of the series he is normally depicted as a very morally dubious anti-hero who became an outright protagonist villain during his "third" incarnation. His name is based on the character from King Lear, Edmund the Bastard.

The premise of the show is showing different versions of Edmund Blackadder from varied time-periods, most of these incarnations are extremely selfish, cynical and at times capable of malice. However, he's more often than not an anti-villain/anti-hero who fights against people worse than himself (that is, when villainous characters other than himself appeared of course..).

He is portrayed by the legendary actor Rowan Atkinson who also portrayed Scrappy-Doo in the 2002 Scooby-Doo movie (in the form of Emile Mondavarious).

In his first incarnation, he is the youngest son of the fictional King Richard IV. Edmund is also the great-nephew of King Richard III, whom he accidentally kills at the Battle of Bosworth Field. This resulted in Richard IV becoming King. Since he is not held in high regard by his father, Prince Blackadder's aim is to become King of England. He recruits some followers named the 'Six Most Evil Men in the Kingdom', who then betray him to Blackadder's rival, Philip of Burgundy. As a result, Blackadder is tortured and badly mutilated. His minions Baldrick and Percy poison the wine which is fed to Philip and his men but unwittingly poison the whole batch of wine. As a result, the royal family are poisoned. Blackadder, who is finally King, drinks the wine and dies.

The fourth and final main incarnation is a captain in the British Army under General Melchett during World War I. Unlike his prior incarnation, this Blackadder has no ambitions for wealth or power; he just wants to escape the war. His misadventures often involve attempting to either trick General Melchett or attempt another method that would ensure his not being in the trenches, often resulting in his butting heads with General Melchett's right-hand man, Captain Kevin Darling. Ultimately, Blackadder is unable to escape the trenches and, alongside Lieutenant George, Private Baldrick, and the recently betrayed Captain Darling, he goes over the trench and is presumably killed by German gunfire.

In the alternative ending to the fourth series final episode "Goodbyeee", it is shown that whilst Baldrick, George and Captain Darling perish in the gunfire, Blackadder pretends to die, only to then get up and go back to the trench after the gunfire stops.

Besides the four main incarnations from the television show, they have been other Blackadders throughout British history portrayed in the show's specials.

This Blackadder starred in the Red Nose Day special, The Cavalier Years.

Here, Blackadder and Baldrick were the last two remaining loyalists of King Charles I during the English Civil War. After Baldrick reveals the hiding spot of King Charles to Oliver Cromwell and his men, King Charles is locked in the tower of London and being prepared for execution. Blackadder later finds out Baldrick had taken the job of executioner for King Charles after nobody else wanted to do it. When Blackadder discovers there would be a £1000 payout, he takes over for Baldrick and disguises himself as executioner. He is, however, discovered by King Charles and so attempts to save him by adopting Baldrick's previous plan and pretending to cut off King Charles's head using a pumpkin with a drawn-on face. This fails and Blackadder ultimately decides to kill King Charles.

Unlike every Blackadder showed before, this Blackadder is described as the "kindest and loveliest man in all England." He was similar to the third and fourth series incarnations in that he wasn't a noble and instead ran a shop in London. His generosity is often taken advantage of by the local citizenry.

On Christmas Eve night, he is visited by the Spirit of Christmas who attempts to congratulate him on his good ways by contrasting it with his ancestors Lord Edmund Blackadder and Edmund Blackadder, Esq. from the second and third series. However, instead of seeing himself as better than them, he admires them for their cunning and wit and asks to be shown what his ancestors' lives will be like if he acted like them. The Spirit does so, revealing if he acted like his ancestors then his distant descendant Grand Admiral Blackadder will become ruler of the Universe. If he continued to be generous his descendant would become a slave under Grand Admiral Baldrick, who would be too stupid and fail at ruling the Universe.

When he wakes up on Christmas Day, he insults everybody he meets including visiting Queen Victoria and her Prince Consort, Albert, who had come to award him £50,000 and the title Baron Blackadder for his good deeds.

In the future where his descendant, Ebenezer Blackadder, turns to evil; this Blackadder served as Thrice-endowed Supreme Donkey of the Trouserpod, Lord of the High-Slung Bottoms of Zob, and Grand Admiral of the Dark Segment of Queen Asphyxia XIX's fleet. Alongside his slave, Baldrick, he killed Asphyxia's three husbandoids and married Queen Asphyxia, becoming ruler of the Universe.

In the future where his descendant, Ebenezer Blackadder, remained good; this Blackadder was the slave to Grand Admiral Baldrick, who wiped out his own fleet and failed to marry into power.

This Blackadder starred in Blackadder: Back and Forth, a short film and last major production of the Blackadder franchise.

This Blackadder is the modern descendant of the Blackadder dynasty and is planning a turn-of-the-millennium prank on his friends Archbishop Melchett, Archdeacon Kevin Darling, Major George, and Lady Elizabeth by pretending he has built a working time machine and handing them fake gifts which he claims are from historical figures and events from history. However, the time machine works, much to Blackadder and Baldrick's surprise.

They end up changing history by:

When they return to discover their actions caused the United Kingdom to be ruled by the French, Robin Hood to have never been famous, and Shakespeare is famous for inventing the biro instead of his sonnets and poems; Blackadder and Baldrick go back to revert their actions.

After he is done, the United Kingdom is once again British, Robin Hood remains a legend, Shakespeare is a famous poet, and Blackadder is King.

While Lord Blackadder and Baldrick were first traveling through history, they landed next to Hadrian's wall preparing for an attack by oncoming Scots. Here they also encountered Centurion Blaccadicus, member of the Roman forces who also consisted of Legionary Baldricus, Consul Georgius, and General Melchius. This Blackadder was capable of speaking both English and Latin and was glad to hear the news that the Senate had ordered they return to Rome, but not so glad of the news the Scots were advancing towards them.

Following Blackadder's meddling of time and history, he is now the King of the United Kingdom on New Year's Eve 1999 with an approval rating of 98%. He is married to Queen Marian (whether this is the Maid Marian of Robin Hood's or her descendant is never elaborated) and is good friends with Prime Minister Baldrick. Elections have been abolished and it can be assumed Blackadder is now the dictator of the UK. 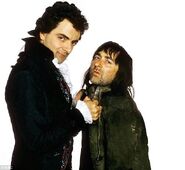 Captain Edmund Blackadder
Add a photo to this gallery
Retrieved from "https://villains.fandom.com/wiki/Edmund_Blackadder?oldid=4337546"
Community content is available under CC-BY-SA unless otherwise noted.