Killing and eating his victims.

Eduardo Flamingo is a major antagonist in the second season of the Gotham TV series, appearing as the main antagonist of the ninth episode "A Bitter Pill to Swallow". He is an incarnation of the DC supervillain Flamingo.

He was portrayed by Raúl Castillo.

Eduardo Flamingo is an assassin, serial killer and cannibal, who is contacted by The Lady to carry out a hit on Detective James Gordon for Tabitha Galavan. He arrives at Theo Galavan's headquarters and takes out the backup, and tells James Gordon that he is coming after him and no matter where he runs he will find him. However, Gordon tells Flamingo he will come to him and arrives at the bottom of the headquarters to confront him. The two face off with Flamingo attacking Gordon with a chain. Gordon manages to overpower Flamingo and sticks a gun in his mouth, however decides against pulling the trigger and has him taken into custody.

While being brought into the GCPD headquarters after his arrest, Flamingo bit into the throat of rookie cop Officer Parks, leading to her death. Several GCPD officers begin brutally beating Flamingo with billy clubs to try and force him off of Parks as he continues his attack on her while she bleeds out, but even this does not stop the sadistic Flamingo as he continues gleefully gnawing at Parks while getting clubbed by the officers. 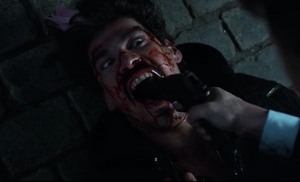 Flamingo is subdued and almost killed by Gordon. 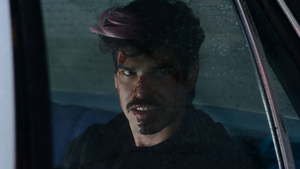 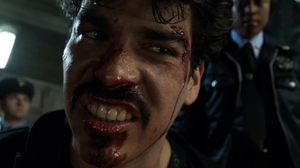 Flamingo prepares to attack whilst being brought into custody.