Bailey
The Da Vinci of Death

Manipulate Victoria, Frank and the others into freeing him from the asylum (succeeded).

Kill Frank Moses and his friends and to use the Nightshade bomb in order to wage total war worldwide by destroying the entire Soviet Empire (all failed).

Dr. Edward Bailey is the main antagonist in the 2013 film RED 2.

He was portrayed by Anthony Hopkins, who also portrayed Hannibal Lecter in both The Silence of the Lambs and Hannibal, and portrayed Ian McCandless in Freejack.

Bailey is a highly intelligent physicist who designed a bomb during the Cold War era for a secret operation codenamed Nightshade. The operation involved smuggling a nuclear weapon into Russia piece by piece.

Frank Moses was the head of Bailey's security team who was tasked with smuggling Bailey out of the USSR; however, he was supposedly killed by a car bomb by the Soviets. Bailey was still alive, though, as the British government merely faked his death and sent him to an asylum for the criminally insane and held there for 32 years. During that time, he heard his wife and son died.

Frank Moses and Victoria Winslow gain entry to the asylum to question Bailey about the bomb, and though he is unhelpful at first (mostly due to the drugs administered by the doctors dulling his short-term memory), Bailey does reveal that the Red Mercury is still in Moscow.

Bailey then accompanies the pair and after retrieving the bomb from within the Kremlin, Frank learns that Bailey had actually been imprisoned not because he built the bomb, but because he had wanted to detonate it to destroy the Soviet Union.

Bailey ends up shooting Katya (who had once had a relationship with Frank), and frames him for her murder before departing. As Bailey escapes to the Iranian embassy in London, Frank convinces top contract killer Han Cho-Bai to help him stop Bailey and retrieve the bomb from him.

Later, Bailey sets off the bomb timer and kidnaps Frank's girlfriend, Sarah Moses, before traveling to an airport to escape the explosion.

Frank and his companions follow, and Frank manages to save Sarah, but Bailey forces him to take the bomb with him before departing in a private plane. Unbeknownst to him, Frank had managed to sneak the bomb on board the plane before disembarking, and as Bailey is flying away, he hears the bomb beeping in a hidden compartment. He accepts his fate and muses to himself that he "didn't see that one coming" before the bomb explodes, killing him.

At first, Bailey seemed to be a really kind, lovely, and joyful individual who would like to aid anyone, as well as Frank, in his things which he wishes to do. In addition to this feature, Bailey's well-known and most popular feature in his personality is his own genius and extreme intelligence, as well as his extensive knowledge about toxics, the Nightshade, and more.

But his kind and joyful look was all just a cover for his true colors. Bailey was actually an extremely ruthless, cold, dark, manipulative, egotistical, selfish, arrogant, psychotic, sadistic, megalomaniacal individual of probably the most diabolical kind. He was an egotistical and cruel megalomaniac who sought to wage World War III via the bomb with destroying the entire Soviet Union, and thus to possibly change the world's balance.

In addition to his chaotic and evil personality, Bailey had shown no remorse or mercy upon his actions, and cared even less about the future destruction that his plan might have (and would have) done. He was also a sadist. For example, when he was on the airplane after being captured by Jack Horton and his men, he had used his toxin, which he himself developed, to escape, and when Horton and his men were affected by the deadly toxin, Bailey showed no remorse towards their pain and the suffering that they felt. Instead, he actually seemed to be enjoying doing it.

More than that, he was an egotistical narcissist, following the reason that all that he loved in his life was his genius. But his personal hobby was antagonizing and manipulating Frank, as well as abusing people for fun. 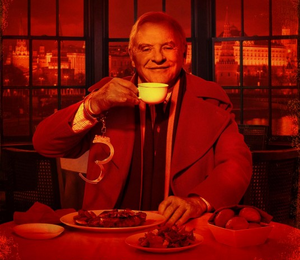 Bailey meeting with Frank Moses in his chamber at an asylum

Bailey after escapes his cell and meets Victoria at the asylum

Bailey outside the Kremlin

Bailey having a celebratory drink with Frank and his team 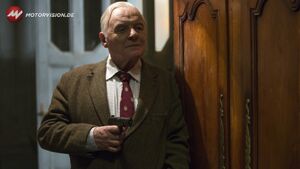 Bailey about to use a powerful nerve gas to escape captivity

Bailey holding Sarah Moses hostage on board a private plane

Retrieved from "https://villains.fandom.com/wiki/Edward_Bailey?oldid=3615095"
Community content is available under CC-BY-SA unless otherwise noted.