Skilled use of his shovel
Night vision

Edward Mason was one of the main antagonists of Satsuriku no Tenshi. He is also the main killer of the B4 floor.

Eddie was a fifteen-year-old boy with fair skin, bright orange hair, and bright green eyes. He wears a pumpkin mask, a red scarf, a pair of gray-blue denim dungarees, and a plain white T-shirt.

Eddie was once a kind and respectful boy who is very devoted to making graves for the family business. He loves animals, taking good care of them in his house. His devotion made him goes far as willing to feel his oldest brother's abuse so the pets would be left alone. However, Edward was frustrated by the fact that his parents only gave him old possessions of his older brothers to him, and then his own is given to his little brother. The constant abuse led him to his downfalls. He began to consider all the graves he made as his treasure boxes, and so he believed that those who were buried in his graves were only possessed by him. This drove him to commit murder so he could bury anyone he killed in his graves, effectively making those people his own. Edward is also childish and immature if anything doesn't happen in his desired way, and he can tend to have little patience at times. Edward also is in love with Ray, as he wrote notes proclaiming his love for her.

Eddie was born in a family that had been graveyard workers for generations. He was the third child of his family among with his three brothers, and he was often considered as the best worker in his family's business. 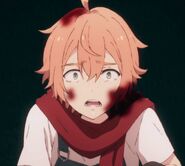 Eddie's death
Add a photo to this gallery
Retrieved from "https://villains.fandom.com/wiki/Edward_Mason?oldid=4037560"
Community content is available under CC-BY-SA unless otherwise noted.