Kidnap campers and recruit them

To enlarge their own camp take it to the first place.

Humiliate and get revenge on their Camp Campbell crew and other opponents.

Edward Pikeman is the leader senior of rival camp Woodscouts, and a recurring antagonists from the Rooster Teeth series Camp Camp. Since his debut in episode "Scout's Dishonor" he has shown his hatred for other rival camps, getting rid of competition as a place, even cheating with the help of his two most loyal subordinates.

Pikeman has auburn spiky hair, in a style similar to that of David's. He has a pale complexion and canary yellow eyes. Also, he has two buck teeth, braces, and acne. Pikeman is shown to wear a beige long sleeve button up, a pair of gold epaulettes, a wine red sash and juniper green trousers. This is the Woodscout Senior Patrol Scout uniform, as the other Woodscouts in Troop 818 dress slightly differently.

He is ridiculously easy to manipulate if someone validates his own personal views on himself, which Sasha does in one episode by saying it will prove him better than Max. He consciously ignores the myriad of warning signs about Daniel in "Camp Loser Says What?" because he led the Wood Scouts to victory over Camp Campbell and Pikeman enjoys the victory too much to consider working against the cultist.

He also shoots down Snake's suggestion of beating the Flower Scouts in sales by killing them. It's also shown that wasn't the first time he's brought up the idea and Pikeman is annoyed with him for doing it again.

While he is an expert scout who's rightfully earned his title, outside of scout related activities he's a bit awkward. He even once tried to practice socially casual conversation, simply for the sake of eventually possibly talking someone into joining his troop.

Pikeman claims that enrollment into the Woodscouts has reached an all time low, so they have 'no choice but to forcibly recruit new members,' He has no qualms about torturing and kidnapping other campers in order to keep the Woodscouts going. Even though he is shown to be manipulative, he is rather sensitive over his acne, becoming upset after Max tells him that his 'face looks gross' in "Scout's Dishonor." Furthermore, Pikeman also likes to 'raise the stakes,' making bets that put Camp Campbell on the line in both "Camporee" and "Jermy Fartz."

He recruits Daniel as a scoutmaster and defends keeping him around against all evidence that this will only end horribly and even after the other Wood Scouts decide the cultist is too unhinged to trust because they've won against Camp Campbell for once. Sure enough Pikeman winds up in over his head and is only saved by the Campbell campers working with his fellow scouts to fool Daniel into leaving. 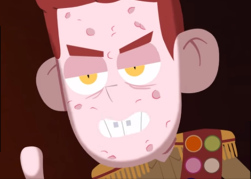 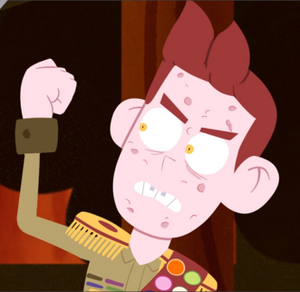