Oust himself of Camp Kidney from Lazlo (kind of succeeded in "Lumpus's Last Stand" when everyone found out Lumpus wasn't the real Scoutmaster).

Edward Platypus is the secondary antagonist and anti-hero in the 2005 animated television series Camp Lazlo.

He was voiced by Doug Lawrence, who is well known for voicing Plankton in SpongeBob SquarePants and Filburt Turtle in Rocko's Modern Life.

Edward is a sadistic, ill-tempered and not completely sane platypus who sleeps in Pinto Cabin with Chip and Skip. He enjoys watching the suffering of others and is constantly coming up with schemes to spoil any fun that Lazlo and his friends might have. He has a severe hatred for Lazlo and Camp Kidney, though that has lessened over time.

Despite his intense dislike of Lazlo, Edward is usually seen as a friend/ally of Lazlo and often associates and joins forces with him usually for a common goal. He's often shown grateful to Lazlo whenever he performs any acts of kindness towards him.

Edward is the smallest member of Camp Kidney, and, as evidenced in Movie Night, he's the youngest as well. He was the only camper who could not watch the horror movie because everybody thinks that he was not a "big boy" yet according to the Bean Scout handbook. Despite his age, he often acts more mature than the other scouts at Camp Kidney and his voice is more like an adult than the rest of the campers. He even has his own credit card.

He has a tendency to panic and overreact when something really upsets him. Due to his spoiled attitude, Edward is constantly needy for attention at all costs. He won Camp Kidney's mascot contest with his "Duke of Lice" costume by using a blackmail drawing of the Jellies who were certain to win but the prize was not as good as it originally seemed. A similar twist of fate occurred when Edward wins the go-kart race, yet his trophy is the smallest of them all.

Despite being precocious and sarcastic, Edward isn't as smart as he thinks he is. His closest friends are his bunk mates Chip and Skip who are the only campers who make him feel smart due to their collective stupidity. Edward is also close friends with Samson as the two are quite often seen with each other, although Edward sometimes picks on him as the series progresses. Perhaps because of their similar personalities, Gretchen from Acorn Flats has a crush on Edward, which Patsy finds amusing. Edward (and later, Gretchen) is terrified when he finds out his needs to compete with Lazlo in checkers. When he is confronted by McMuesli over his anger issues, Edward mutters a single word, "loser", which is a stark allusion to the insecurities Edward feels. He also has a few aspects in common with Scoutmaster Lumpus, and the two worked together to stop Edward from going to Tomato Camp in Tomato

He has no imagination when it comes to names. In Hello Dolly, when he received Veronica for Christmas, he said, "I think I'll call you... Veronica!" and in Ed's Benedict he named the egg he supposedly laid after himself.

Edward is very deceitful, and hardly an episode goes by without some scheme of Edward's failing to induced the worship Edward so much desires. He ordered a number of phony merit badges to make himself feel better, which almost has him attending Tomato Camp. This was one of the traits he had in common with Scoutmaster Lumpus. In Being Edward, he tried making everyone worship him on "Edward Day", only for everyone to misunderstand and so they light-kindheartedly decided to be as rude and obnoxious as him (basically, being Edward for a day).

Edward has a horrible tendency to bite off more than he can chew. When he faked a yeti attack in Radio Free Edward, he claimed that he handled the situation when really it was just a ratings stunt and he claimed that he would be ready next time they attack. However, when they broke into the radio station, he was reduced to a trembling, screaming wreck and is still cowering in a corner when the yetis turn out to be more or less harmless.

Edward has four older brothers who also attended Camp Kidney and look down on him due his being the youngest. It's because of this bullying that Edward has developed an aggressive personality. He finally stood up to his four older brothers after they used him as a tether ball and accidentally sent him hurtling towards two other campers who had been bullied, teased, and harassed by them four years prior.

Like his older brother Cheesly, Edward can be very sycophantic, especially towards the Scoutmaster. However, unlike his four older brothers, Slinkman knows how to handle the platypus.

As a result, Edward is very insecure and concerned with being 'macho' in order not to be humiliated by everyone, in spite of the fact that in Hello Dolly, Lazlo is very accepting of the fact that he plays with dolls (much to his older brothers' disgust). It's revealed in Movie Night that despite his attitude, he is actually the youngest camper in Camp Kidney. 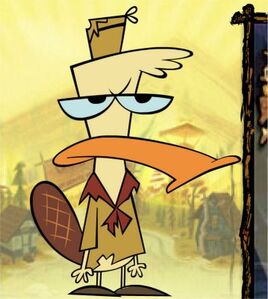 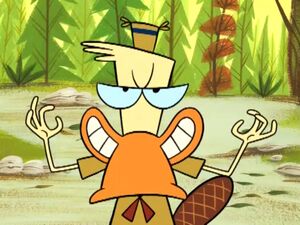 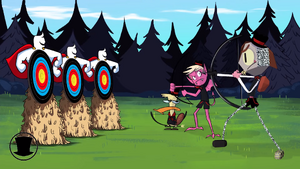