To get himself out of Camp Kidney from Lazlo.

He is voiced by Doug Lawrence, who is well known for voicing Plankton in SpongeBob SquarePants and Filburt Turtle in Rocko's Modern Life.

Edward Platypus is a platypus who sleeps in Pinto Cabin with Chip and Skip. He enjoys watching the suffering of others and is constantly coming up with schemes to spoil any fun that Lazlo and his pals might have. He has a severe hatred for Lazlo and Camp Kidney, though that has lessened over time.

Despite his intense dislike of Lazlo, Edward has joined forces with him for a common goal on a few occasions.

Edward is the youngest member of Camp Kidney and was the only camper who could not watch the horror movie because he was not a "big boy" yet according to the Beanscout handbook. Despite his age, he often acts more mature than the other scouts at Camp Kidney and his voice is more like an adult than the rest of the campers. He even has his own credit card.

Edward won Camp Kidney's mascot contest with his "Duke of Lice" costume by using a blackmail drawing of the Jellies who were certain to win but the prize was not as good as it originally seemed. A similar twist of fate occurred when Edward wins the go-kart race, yet his trophy is the smallest of them all.

His closest friends are his bunkmates Chip and Skip who are the only campers who make him feel smart due to their collective stupidity. Perhaps because of their similar personalities, Gretchen from Acorn Flats has a crush on Edward, which Patsy finds amusing. Edward (and later, Gretchen) is terrified when he finds out his needs to compete with Lazlo in checkers. When he is confronted by McMuesli over his anger issues/management, Edward mutters a single word, "loser", which is a stark allusion to the insecurities Edward feels. He develops a fierce relationships with his four older brothers, which makes Edward and his four older brothers an evil versus evil-type villains.

Edward is very cunning, deceitful, selfish and manipulative, so he hardly (an episode) goes by without some scheme of Edward's failing to induced the worship Edward so much desires. He ordered a number of phony merit badges to make himself feel better, which almost has him attending Tomato Camp. 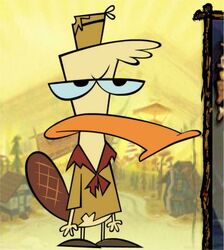 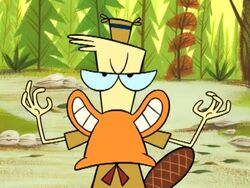 Edward's evil grin
Add a photo to this gallery

Retrieved from "https://villains.fandom.com/wiki/Edward_Platypus?oldid=3176537"
Community content is available under CC-BY-SA unless otherwise noted.