Attacking people.
Loving right hands of his handpicked victims he would soon take as his personal trophies.
Lying.
Speaking and even swearing in an ancient Hungarian language.
Preferring to speak English.

Kill as many people including his last victim Margaret St. James as possible (succeeded to an extent).

He was portrayed by Paul Fauteux as himself, and by Jackson Robert Scott in his disguise as Miles.

In 2010, Edward Scarka had murdered nine women and cut off their hands as trophies. On August 22, he let his latest victim, Margaret St. James, get away and alert the police on his whereabouts, where they gunned him down dead while he was naked. Minutes later, a boy named Miles Bloom was born with a brown eye and a green eye like Scarka. Miles was showing remarkable intelligence, such as saying "Mama," before he reached his first birthday, and starts speaking fluently before he’s a toddler.

By the time Miles was eight, his parents have noticed unusual behavior from him. He played a prank on his babysitter, Zoe, severely injuring her, but recalls nothing of the event. After being denied a seat to a girl, Miles takes a wrench from the janitor’s closet, and attacks a classmate sitting next to her. His mother, Sarah, noticed that he was seemingly speaking in tongues in his sleep, even noticing him whispering, "Go fuck yourself." Sarah sends a tape recording to Arthur Jacobsen, the child psychologist, and Arthur reveals that what Miles was speaking was in ancient Hungarian language, translated to "I'll cut your eyes out and watch you die, whore.".

Sarah refuses to believe that an unsettled spirit is possessing her son. After a few days, the family dog goes missing. Noticing a swarm of flies and a trail of blood, Miles notices Sarah about to open the cabinet in the basement where the flies are coming from and starts crying when she finds the dog dead and dismembered. Miles apologizes and says that when he leaves his body, bad things happen, and that someone invades his dreams every night to "make room."

Sarah takes Miles to Arthur to hypnotize him in hopes of uncovering any past life regression, allowing him to speak to the dark spirit in his body. The process was successful, and the spirit says that he was born to Hungarian immigrants. But the process goes awry when the spirit threatens to take medications not safe for an eight-year-old boy, and make it look like Miles was drugged and molested. That prompted Arthur to end the session. Soon after, Arthur noticed that the boy scratched the name, SCARKA, on his leather couch. He calls Sarah, and tells her that Miles is possessed by Edward Scarka, who looks to continue his killing spree. Upon researching Scarka, Sarah is horrified to find out that Scarka has a green eye and a brown eye, just like Miles, and that he died minutes before Miles was born. She, along with Miles’ father John, decide to have Miles committed. While John was driving Miles to the facility, Scarka takes control and stabs John with sharpened hedge clippers, causing him to crash and go in a coma. Sarah inspects Miles’ room to discover newspaper clippings of Scarka’s victims, even the one that got away, Margaret St. James.

Sarah believes that Scarka is possessing Miles, so he can kill Margaret, so she decides to kill her herself. She drugs Miles with sleeping pills, and drives to Margaret’s rural house, posing as a battered woman who was touched by her book. She pulls out a gun, but couldn’t bring herself to kill her. Edward in Miles’ body encounters Margaret and asks which eye she likes better, brown or green. Recognizing that’s what he said to her eight years ago, Margaret tries to escape, but Edward brutally attacks her with a butcher knife, disemboweling her. Sarah finds Miles outside, believing that Edward’s final deed was complete, and his soul has left, but Edward reveals that he has full control over Miles’ body, vanquishing his soul, telling Sarah that he took full control the moment she told Miles that she’ll love him forever. Sarah gets her gun out, saying that Edward took her son’s soul, but she would not allow him to take his body. Before she could kill Edward, a farmer shoots her with a rifle, and Edward feigns innocence.

Soon after, Edward Scarka, in Miles’ body, has been taken to a temporary foster home. In his new bedroom, he looks in a mirror to see his true self.

Scarka was shown to be a strong serial killer in life, and a strong-willed ghost in death. Possessing the young Miles shows that he can take a complete control over someone and completely erase the host's former personality. It seems that regardless of his host body, Scarka preserves his strength and dexterity with weapons. 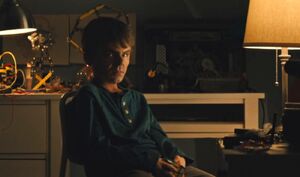 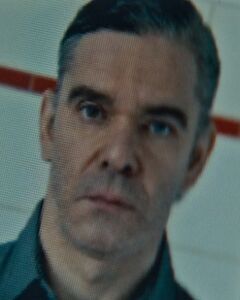