High intellect
Expertise in assassinating and torturing others

Sadomasochistic Assassin
Edward Wade is a major antagonist in the video game Hitman: Absolution. He is an international mercenary and hitman. He is also the long time friend of Blake Dexter and Dominic Osmond.

He was voiced by Larry Cedar.

Edward Wade was born in South Dakota, the same place of birth of Blake Dexter. The two were not friends until their adulthood. In some point of his life, Wade became a mercenary, gaining his reputation as a heartless murderer who will kill any possible witness he can find. He worked with Colombian cartels for some time, gaining the friendship of Blake Dexter.

In 2012, Dexter learns about Victoria. and what she really is and is capable of, and desires to go find her. After learning of her location in a church/orphanage in Chicago, he meets with his boss and his other minions, told that together he and his goons will make thirty-five thousand dollars when all is said and done. Arriving in Chicago, Edward Wade kills countless nuns and security personnel to find and kidnap Victoria. After shooting his way through his gang, Agent 47 has the option to either through a sneak attack or in a shootout.

Either way, after 47 deals with Wade, he finds a matchbook from the town of Hope, South Dakota in Wade's pocket and then leaves him to slowly bleed to death.

Edward Wade is a complete psychopath and sadist who has no care for others except the ones who think like him or act like him. Edward Wade is not only completely deranged in his habits of killing anyone unlucky enough to bump into him in his missions, but is also a necrophile, threatening to please himself with Agent 47's corpse if he manages to kill him.

He's also abusive towards the mentally challenged Lenny Dexter, referring to him as "Limp-Dick Lenny" and forcing him to kill a nun, then mocking him when he's shocked that he actually killed her since he did it accidentally. It's also implied he would have killed children, as he didn't know that the children were on a field trip when he massacred the orphanage. He's also likely a sadomasochist, as he gets an erection when 47 kills him. 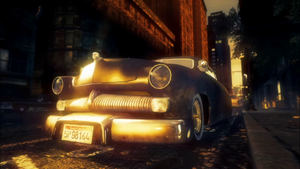 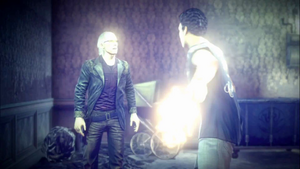 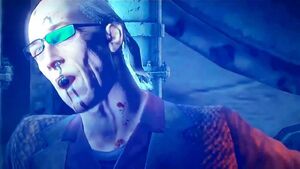 Wade as he dies in the basement of the orphanage.