Survive the Predators assault and to stay on the extraterrestrial planet (failed).

Edwin is a major antagonist in the 2010 sci-fi film Predators.

He was portrayed by Topher Grace, who also played Venom in Spider-Man 3, Adrian Yates in American Ultra and David Duke in BlacKkKlansman.

Though he initially appears to be a harmless and neurotic doctor thrust into a circumstance beyond his humanly control, he is actually a serial killer who spends most of the movie waiting patiently for the opportune moment to not attack the alien hunters bent on killing him, but his fellow crew members. The only one who is wary of his evil intention was Royce, who concluded that humans who abducted by Yautjas were in fact, share one thing in common (having experience in killing people) and suspecting that Edwin may hid his true color. He claims later in the film to have children, and shows a picture (someone else's).

On the planet, he is often in a panic and seems helpless, often having to be saved by one (or two) of the others in the group, usually either Nikolai or Isabelle.

His knowledge of poisonous plants saves Nikolai who (after that) looks after Edwin. After the group finds the Super Predator camp and get attacked, they try to set up a trap for the Predators. Royce decides to use Edwin as bait to lure the Predators out (much to Isabelle's displeasure, who had a dislike of Royce's pitiless trait). Running through the jungle, Edwin is chased by a monster called River Ghost. Isabelle fires at it and it falls, as the group moves around the dead alien Royce comments about Isabelle's good shot, but Isabelle points to a nearby tree trunk pointing out a bullet hole saying she missed. Moments later they hear whispering and Royce is held at gunpoint by an invisible figure, when asked "What, the fuck, are you?" the figure takes off his helmet and is revealed to be a human surviving on the planet for years named Noland. At Noland's hideout he answers the groups questions about the Predator's ship and the current situation. Later after Noland presumably goes to sleep Nikolai shows Edwin a picture of his kids, and Edwin keeps it, while Stans disturbingly shows off a tattoo of a naked woman on his stomach, to which Edwin asks "What, is that your girlfriend?", and Stans replies "No, that's my sister.".

Noland explains how the planet and the Yautja work, and in the conversation tells them the Predators have a ship, which Royce decides to try and steal. Later Noland tries to kill the group via smoke asphyxiation to take their belongings, and Royce purposefully alerts the Predators to their location to try and escape. While escaping Edwin gets separated from the group. Using flares to try and find his way out Edwin eventually finds the others but cannot reach them due to the fact that they are between a wall separating the two hallways. He begs the others to not leave him, but they all apparently leave regardless. Now alone Edwin uses another flare and throws it down the passage and hits the Tracker Predator. Just before the Predator can kill him Nikolai returns shooting the Predator several times and leading Edwin back to the group. While escaping Nikolai is shot by the Predators Plasma Caster, and Edwin hesitates on what to do but soon leaves Nikolai to the Tracker. Nikolai, knowing that he's done for detonates several of his M18A1 Claymore mines, killing himself and the Predator, resulting in a massive explosion which fills the tunnel as the group is still escaping.

Shortly afterward Berserker shoots Stans in the back with his Plasma Caster; however Stans survives and attacks with his shiv while the others escape, ultimately sacrificing himself in the process. The rest of the group continue towards the Predator camp until Hanzo decides to stop running and face Falconer in an honorable one-on-one battle. In the ensuing fight Hanzo and the Predator kill each other, leaving only Edwin, Royce and Isabelle. While they're running back to the camp Edwin accidentally steps into a maiming trap that cripples him. Thinking it was a kill trap he thinks he is lucky for not being dead but Royce tells him otherwise. He begs for them, just as Royce openly predicts he would do, to not leave him claiming he has a family and kids (using the picture of Nikolai's children he took from him before he died to try and convince them), Royce however wants to booby trap him and leave him. Isabelle refuses Royce's proposition to leave him because she regrets abandoning her spotter to die before she was abducted, and Royce goes on without them to steal the Super Predator's ship.

Unexpectedly, there, he paralyzes her with a neurotoxin and explains his true nature to her, while sneering at her the fact that no one had suspected who he truly was the entire time. Edwin announces that he intends to make the alien planet his home, saying that he, among monsters, is perfectly normal. Before he can finish her, Royce unexpectedly came to save them and changed his mind from leaving them in the planet. Edwin, putting back his innocent facade, acts like he does not know why Isabelle cannot move before preparing to backstabbed him. Unfortunately for him, Royce, who was always suspicious of Edwin, anticipated this by letting Edwin make the first move: once Edwin tried to stab Royce with his poisoned scalpel, Royce turned the blade against him and then rigs him up with a number of hand grenades. When Berserker Predator converges on him, the grenades detonate, killing Edwin but unfortunately not the Predator. 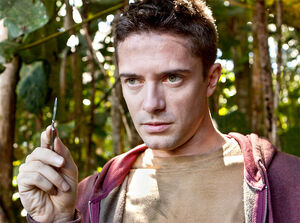