Seeking revenge on Edgar's death in the first movie, the Bug Queen sent Edwin the Bug to avenge his brother.

During his search, Edwin finally finds Elle (the very same woman who killed Edgar). Unfortunately, Edwin competed against Dung and Moe for the Bug Queen's reward.

Though Dung and Moe were defeated by Jay, Kay and Elle, Edwin defeats all three agents and takes them hostage, abandoning Dung and Moe to their fates. Fortunately, several space worms (who stowed away in Kay's car) arrive to the rescue by giving their sugared coffee to Dung and Moe to restore their energy.

Dung and Moe used their De-Atomizers to destroy Edwin in a circumstance similar to Edgar's. 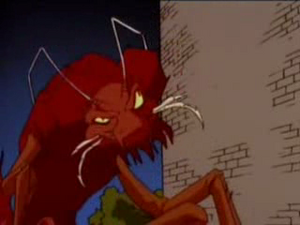 Edwin planning to scale a wall 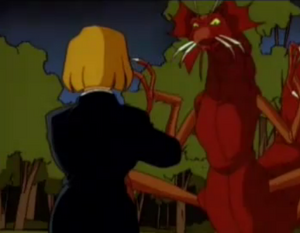 Edwin facing Elle
Add a photo to this gallery

Retrieved from "https://villains.fandom.com/wiki/Edwin_the_Bug?oldid=3833487"
Community content is available under CC-BY-SA unless otherwise noted.