Succeed as a circus clown (failed).

Perform his comedy act and make an audience laugh.
Kill Bonzo (both succeeded).

Edwin the Clown is a psychotic serial killer clown and the main antagonist in the 2010 dark comedy horror movie Klown Kamp Massacre.

After unfairly losing his only chance to becoming a circus clown, he takes revenge on the camp by murdering every student there.

He was portrayed by Jared D. Herholtz who reprises his role in the unreleased 2013 short "Bloody Birthday".

Nothing is known about Edwin's childhood, not even his last name. However, it is safe to say that he has always wanted to be a clown to make the world laugh. His mother supported his dream by paying for him to be sent to Clown Camp at Bonzo's Ranch with a whoopee cushion signed "Love, Mom". His father however wanted him to stay and work in their family store stacking the shelves.

Once he arrived at Bonzo's Ranch, he failed at everything he did and never made anyone laugh. At the last day of camp, Bonzo held try-outs for every student at the camp, this being Edwin's final chance to pass and become a real circus clown.

When he was called to the stage, he called for a volunteer that quickly came to his side, readying the whoopee cushion his mother gave him so his assistant could sit on it. However, once the assistant did, another student's phone started loudly ringing and ruined his act. Edwin started begging and pleading for another chance, but all the other students only yelled at him to get off the stage and assaulted him with pies while laughing at him until he ran off, utterly humiliated.

The next day, he murdered every student and teacher alike at the camp, except for Bonzo, out of pure spite. After filming a video confession and sending it to his mother, Edwin went into hiding for 15 years.

Long after the horrors of the massacre had died down and mostly forgotten about, Bonzo announces a grand re-opening of the camp on live television, sending Edwin into a rage, and forces him to return to the camp to take revenge on Bonzo and kill every student once again so it would stay closed forever.

Once he was back at the camp, he quickly killed the two teachers working at the camp so he can safely get to Bonzo and hang him inside his bathroom.

Once he dealt with Bonzo, Edwin turned his attention to the students and over the course of a few days, killed all but one student named Valerie, Bonzo's niece.

After she accidentally knocked herself out running away from Edwin, she awakens to him at the very same stage 15 years ago with all of her dead friends and Bonzo posed as the audience so he can attempt his try-out once again. Once she sits on Edwin's whoopee cushion, there was a brief moment of silence. Suddenly, laughter starts coming from the crowd revealing that the whole ordeal was an elaborate national prank TV show for Bonzo to regain his fame. Edwin the Clown is shown to have been portrayed by fictional actor, Vic Vickers.

It was revealed that Valerie had to be sent to an insane asylum due to her trauma that left her catatonic. The real Edwin the Clown watches all of this unfold on his TV and angrily declares he will kill everyone who did this to Valerie.

According to producer Phillip H.R. Gunn and director David C. Valdez, Bloody Birthday would have began with Edwin going to a child's birthday party uninvited and start performing for the children to try and make them laugh, not knowing how uncomfortable he's making them with the children believing him to be a monster. The father of the birthday child would then approach Edwin and ask/demand for him to leave, sending Edwin into another rage and kill the father by hanging him up from a tree like a piñata and possibly several others at the party.

His entire life, even after the 1991 massacre, Edwin was shown to be a shy and socially awkward man that still wanted to make his mother proud and become a circus clown. When he didn't get what he wanted, he quickly flew into a psychotic rage and didn't calm down until everyone that angered him was dead, afterwards returning to his usual shy nature and apologize on camera for everything he did but not actually regretting his actions.

Whenever he would stalk and eventually kill his victims, he would laugh the entire time and sometimes make a bad pun at their expense. At times, he would be incredibly cruel. In one instance he silently killed Brandi by decapitating her in a dark room while her boyfriend Tipsy investigated a noise Edwin made while they were having sex. When Tipsy returned, he went back to having sex with Brandi's body, not realizing what he was doing until he noticed her bleeding. Then, Edwin held up her severed head and the hatchet he killed her with for him to see right before killing him.

At times however, unlike most horror movie killers, he did show remorse for some of his kills and actions. For example, after switching a spray bottle of seltzer with acid, he let Lenny spray his friend Vinnie the Clown in the face with it. Horrified at the sight, Lenny ran from the camp into a field where he found a pie with lots of whipped cream on it hiding a bomb (poorly) and blew up his head. After the second massacre, he saw in an interview with Lenny that he wanted to entertain the world like he did with his incredible ukulele playing abilities despite his mental handicaps, saying the thought was "beautiful".

There is a possibility that Edwin was a cannibal since Butzer's song about Edwin's massacre mentioned that he "ate some of them, while they were still breathing". It's possible that he was just making this up to scare the other campers at a campfire, however Edwin did scalp and force one of his victims in the 1991 massacre to eat pieces of their own brain and he could have eaten some as well, but it's not shown on screen and he never hints, implies, or threatens to eat someone again in the movie.

Edwin has no superhuman special powers, from the reason he is a human being like everyone around him, yet he indeed had a variety of abilities such as; 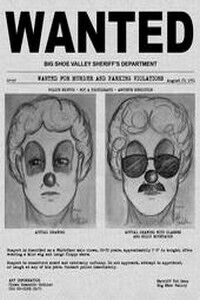 Wanted poster made for Edwin, parodying The Zodiac Killer. 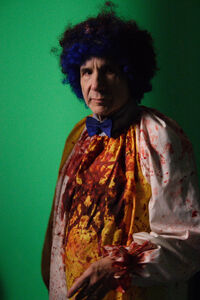 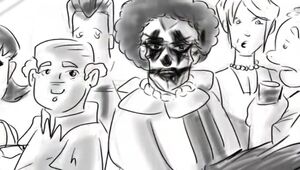 Edwin in a story-board sketch for Bloody Birthday. 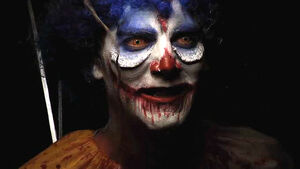 Edwin's face reveal to Valerie in the attic of his home. 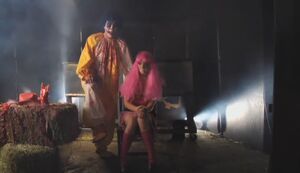 Edwin with the kidnapped Valerie in the basement of his home. 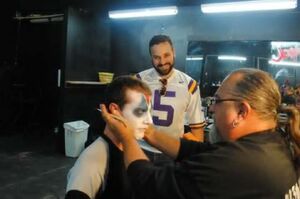 Jared Herholtz having his Edwin the Clown makeup applied. 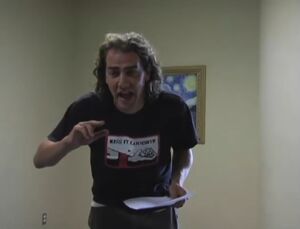 Jared Herholtz during his audition for Edwin the Clown.