Queen of the Butterflies

Controlling humans beings for her purpose.

She is the leader of the Butterflies who wants to take over Earth, in an attempt to save her species from extinction. In her quest, Eek Stack Ik Ik started possessing humans, who she views as puppets. She also comes into conflict with one of her own known as Clemson Murn, Peacemaker, and their team, the 11th Street Kids.

At some point, Eek Stack Ik Ik and the rest of Butterflies came to Earth seeking a new home after their native planet was dying. Initially, the Butterflies wanted to live in peace amongst the humans until Eek Stack Ik Ik decided to change their plans into taking over the world by possessing humans in positions of political power and by becoming their queen.

Under Eek Stack Ik Ik's leadership, the Butterflies infected thousands of humans across the globe, with Eek Stack Ik Ik herself possessing United States senator Royland Goff. Using a special cow to produce their food for them, they set up an effective secret government and food distribution system and were almost prepared to conquer Earth, until one Butterfly decided to oppose Eek Stack Ik Ik's plans for world domination and possessed a human named Clemson Murn to create a team of humans to combat them.

Approximately one year later, Peacemaker, Vigilante, and Emilia Harcourt was sent to kill Royland Goff and his family. Royland Goff's son, wife, and daughter were all assassinated by Vigilante, but Goff was saved by the interference of Judomaster who knocked out Vigilante and Peacemaker. Goff kidnapped the assassins and brutally tortured them to get information. The rest of the team managed to rescue the two with an explosion that gave Peacemaker the chance to free himself and kill Goff, forcing Eek Stack Ik Ik to leave Goff's body but she was captured by Smith. Smith lied to the rest of the team about killing Eek Stack Ik Ik and instead kept her in a jar intending to interrogate her for answers, Smith instead kept the butterfly as a pet.

A few days later, Eek Stack Ik Ik made a peace symbol by carving into the glass of the jar to communicate with Peacemaker and Vigilante. The two tried to ask her "yes or no" questions about the Butterflies' goals, until they were interrupted when Christopher Smith's trailer was raided by the Evergreen Police Department forcing them to make a hasty retreat during which Eek Stack Ik Ik's jar is broken giving her the chance to escape and take over the body of Sophie Song, killing her in the process. Using Sophie Song's body, Eek Stack Ik Ik contacted an army of Butterflies to take over the entire Evergreen Police Department.

Afterwards, Eek Stack Ik Ik, along with the possessed police, headed to Murn's location and shot him. Before they leave, they discover Murn was actually Ik Nobe Llok. Eek Stack Ik Ik comments on how he should have joined them before crushing him in her hands, shocking the other butterflies before leaving to ready the teleporation device for the cow.

As they work on setting up the teleportation device, Eek Stack Ik Ik and the butterflies are alerted by Economos, who had infiltrated them and had one of Peacemaker's helmets conspicuously out in the open. Before the butterflies kill Economos, the helmet shoots out a number of shockwaves, causing damage to the farm and killing several butterflies. Horrified, Eek Stack Ik Ik rushes towards the damaged farm to check on the cow. Shortly after, Eek Stack Ik Ik notices someone underground under rubble. Eek Stack Ik Ik fishes him out and discovers its Peacemaker. After a brief fight (and Adebayo knocking herself out with the human torpedo helmet), Eek Stack Ik Ik invites Chris to help them teleport the cow to another base in Maine. Eek Stack Ik Ik explains to Chris that their planet was on the verge of destruction so they abandoned it to survive, finding themselves on Earth. The food on Earth was unsustainable to them so they brought with them the cow for sustenance. However, Eek Stack Ik Ik realized the humans were also making the same decisions that led to their home planet getting destroyed and sought to take over humans in influential positions to determine the right choices to preserve Earth and its inhabitants, although Ik Nobe Llok disagreed with her methods. Eek Stack Ik Ik pleads with Chris to help them save Earth by helping them, in the name of peace. Chris, in response, triggers the human torpedo (with Adebayo still wearing the helmet), shooting her directly into the cow, killing it. Chris quickly takes Eek Stack Ik Ik's pistol and kills Locke, before destroying Eek Stack Ik Ik's human body. As Chris walks away with Adebayo, he notices Eek Stack Ik Ik fleeing from the body.

With the cow dead and her plans foiled, Eek Stack Ik Ik returned to Chris's residence for food.

According to Clemson Murn, Eek Stack Ik Ik was once a benevolent leader who only wanted a peaceful life on Earth, but at some point she decided to instead take over the world. Eek Stack Ik Ik sees humans as little more than puppets she can control to pursue her goals, showing little concer for whatever human she possesses and disregarding the fact that Butterflies kill whatever human host they take over. Eek Stack Ik Ik doesn't even attempt to pretend being a human while possessing one, she talks about humans in a condescending manner and when looking at the memories of her current host she does so more out of curiousity rather than attempting to understand them.

In a twisted manner, Eek Stack Ik Ik believes that her actions are for the better good of the world, she drew a peace symbol on the jar that Peacemaker kept her trapped in as a means to try to earn sympathy from her captor and bring an army of Butterflies to massacre and take over the Evergreen Police Department she told Fitzgibbon that it was "for the best" that she did so. 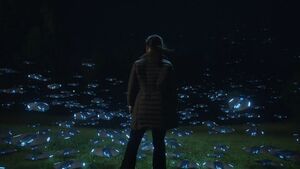 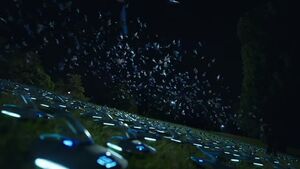