See that Lyzera to take Earth's magic and rule the universe.

Eelix is one of the supporting antagonists of the CBBC science-fantasy TV series Wizards vs Aliens. He is the pet bird of Lady Lyzera, the Queen Regent of Nekon and travels with her, her husband Varg and fellow Nekross in their spaceship the Zarantulus where they will extract Earth's magic. However unknown to Varg and the other Nekross, Eelix is in on Lyzera's plan to take Earth's magic for herself and take over the universe. Most of the time, Eelix makes the usual bird noises but when he is in Lyzera's Sorceress Zone, he is able to talk.

He was voices by Lewis McLeod.

He makes his first appearance in the Series 3 episode The Secret of Room 12 where he is shown to be living on the Zarantulus with his owner and her husband. He is also seen being fed Beetroo Bugs by Lyzera and last seen arriving in his owner's Sorceress Zone where he is shown to be in on Lyzera's plan to take Earth's magic for herself and rule the universe.

He makes his next appearance in The Quantum Effect where in the Sorceress Zone, he sees that Lyzera has a vial of magic and asks her if she will give magic to the other Nekross back on Nekron to which Lyzera says she will, but only when they bow to her. He later appears when Jathro is brought to Varg and Lyzera for his previous betrayal (when he along with his mother Chancellor Kooth tried to overthrow the Royal Family) where Lyzera suggest making him, Eelix's jester whilst Varg suggest to turn Jathro into bird food.

Later in The Key of Bones, Lyzera turns Jathro into beetroo bugs as punishment for betraying her as sorceress to Varg and then feeds the bugs to Eelix.

In the episode, Twilight Falls, Eelix catches Tom Clarke, Randal Moon and Jazz James in the Sorceress Zone but is silenced by them. He later tells Lyzera that Tom has one spell left and later witnesses Tom use that last spell to destroy Lyzera's orb and use the magic there to take him, Randal and Jazz back to Earth. 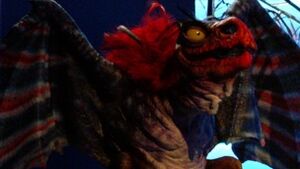 Retrieved from "https://villains.fandom.com/wiki/Eelix?oldid=3519511"
Community content is available under CC-BY-SA unless otherwise noted.