Defeat Sonic and Knuckles. (both failed)

The EggRobos, also known as Eggman Robos, are recurring minor antagonists in the Sonic the Hedgehog franchise. They are egg-shaped robots that first appeared in the video game Sonic & Knuckles, along with Sonic 3 & Knuckles. They are designed in the likeness of the infamous Dr. Ivo "Eggman" Robotnik, intended to surpass even his strongest creations, including Metal Sonic. One of them was an enemy of Knuckles the Echidna before accidentally being destroyed by its own partner, Mecha Sonic.

An elite group of EggRobos known as the Hard-Boiled Heavies appear as the secondary antagonists of Sonic Mania, and Sonic Mania Plus.

EggRobos are mostly seen as common enemies, sent by Robotnik to hinder Sonic and Tails as they got closer to Sky Sanctuary, with the exception of one EggRobo which serves as the main antagonist for Knuckles the Echidna's plotline up until Mecha Sonic appears in the Sky Sanctuary Zone, and is overall the secondary antagonist of the game along with Mecha Sonic after Knuckles is betrayed by Dr. Robotnik.

The EggRobos reappeared in Sky Sanctuary Zone as enemies of Classic Sonic.

In the Titanic Monarch Zone, the last zone of the game, Egg-Robos appear as drivers of high-speed vehicles that move on rails. When hopping on these vehicles, the Egg-Robo takes the player for a ride, crashing into the end of the rail. The player does not get damaged from this, however.

EggRobos appear in Super Smash Bros. for Nintendo 3DS as both enemies in the Smash Run campaign and one of the game's various collectable trophies.

In the Archie Comics, EggRobos, here called EggBots, were originally created by Snively who designed them as a mockery of his uncle Dr. Robotnik. Although Snively claimed they were built as mining robots, he secretly used them to do his dastardly bidding. However, they were eventually destroyed by his enemies. The history of EggBots were forever changed from the aftermath of the Super Genesis Wave. In this continuity, their history is similar to their video game counterparts.

In the comics by Fleetway Editions, an army of EggRobos appeared during the Sonic & Knuckles adaptation. Here, they were controlled by Robotnik through his control room aboard the Death Egg II. Robotnik could see everything and talk through them, but there were a few models without the control of Robotnik, such as the one Knuckles chased down, who was running low on organic battery and tried to capture a young bear named Jake. Knuckles chased this EggRobo throughout various zones attempting to free Jake from the EggRobo, and finally confronted it in Lava Reef, where Knuckles barely won, but still managed to free Jake from the EggRobo and destroy it, thus saving the day.

EggRobo was intended to be Eggman's strongest creation yet, outmatching even his greatest creations, including all of the Metal Sonic series models combined, but thanks to its egg-shaped body, the EggRobo failed to live up to the doctor's expectations as it ignored air resistance. But somehow, it could still reach speeds comparable to that of Metal Sonic, Robotnik also boasts of the offensive abillities that EggRobo has, meaning that EggRobo is one of, if not the greatest invention of Eggman yet, aswell as being his robotic equal.

A trophy of a EggRobo of Super Smash Bros. for 3DS. 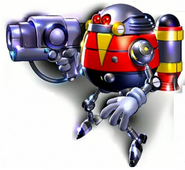