Working in the mall (sometimes)

Go to live in Acapulco and meet exotic women with whom to fall in love.

The Egg Santa, also known as the Huevo Santa in Spanish, is an antagonist in Huevocartoon. He is a bitter and serious egg that gives bad gifts of low cost to the children because, according to him, they never behave well. He has never entered the fireplace when he presents gifts. In his workshop, his assistant elves do not work. Only one reindeer looks hungry, being Rudolph.

The Egg Santa a cruel satire to Santa Claus. The holy egg is a bitter egg that gives low-cost gifts to children. It is vulgar and conflicting, and never enters the chimney. In his workshop, the goblins are on strike, and the only reindeer left is Rodolfo, since the rest supposedly ate them. Mrs. Claus went with her mother, according to Egg Santa "To think things." According to Ferdinand, Santa does not want him, because he has asked for gifts, hates children and never works. Once appeared in the show of the Mr. Dongo and fought with the same presenter, given that he went through criticizing the conditions of the program.

Most of his fragments and sketches in the episodes he stars, does nothing more than complain about his work as the Christmas figure, mistreating the children who gave them their gifts of very poor quality, showing little enthusiasm for their work .Living in a deplorable situation inside his cabin in the north pole, not to say that his workshop of gifts is in bank broken for lack of budget. 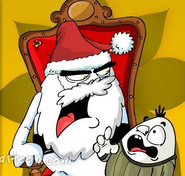 Huevos Cartoon Huevo Santa
Add a photo to this gallery

Retrieved from "https://villains.fandom.com/wiki/Egg_Santa?oldid=4141683"
Community content is available under CC-BY-SA unless otherwise noted.