Egg of the Perfect World

Egg of the Perfect World

Sacrifice himself in order to bring Griffith into the Physical World.

Complete the Incarnation Ceremony.
Tell his story to Luca so at least one person would be aware that he existed in the old world. (all succeeded)

Pushing forth the Age of Darkness

The Egg of the Perfect World (完璧な世界の卵) is a minor antagonist of the Conviction Arc in the manga series, Berserk. He was once a deformed outcast from society who became an apostle and watched over the temple of St. Albion and its surroundings. He and was extremely curious about the humans who beat him and created their own hell.

He was voiced by Hiroyuki Yoshino in the 2016 anime adaptation and by Derek Stephen Prince in its English dub.

A deformed human who has no name or no knowledge of who he is, "Nobody" lived away from civilization. His first memory was being in the trash dump at the base of the Tower of Conviction, and survived by eating garbage, which is also where he obtains a Behelit. Throughout his life, no-one knew of his existence until he appeared in front of others. People threatened him and threw rocks upon seeing him, forcing him to dig a small hole in which he resides as it grew deeper. Eventually a corpse fell down the hole, and soon more bodies continuously fell in, piling up on and crushing him. As he was losing consciousness, the God Hand was summoned, allowing him to realize the world he lived in. Nobody decided to sacrifice the world that surrounded him, and become an egg to hatch a "perfect world".

The Egg then crawled out of the hole and began to observe the newly arrived humans -the dead, the living, the Holy See and the heretic cultists-. He first transforming the leader of the heretics, the Great Goat, Bishop Mozgus and his disciples into pseudo-apostles. In his view he was merely giving powers to those who desired of it.

During the Incarnation Ceremony at St. Albion, the Egg kidnapped Luca and took her to his underground sanctuary and home where the Egg had created a symbol similar to the Holy See emblem, made from corpses. The Egg then told her of his life and how he had been observing people around Luca, including Nina. The Egg then encountered Skull Knight, who pursued the Apostle to his underground home. The Egg attempted to fight the knight but the knight effortlessly wounded him (but failed to kill him). When asked by Luca why did he tell her all his life's story, the Egg told her as he fled that he wanted to tell someone his history before he disappeared. The Egg briefly wondered that if he was discovered by Mozgus and became his disciple would his life have been different. Wounded and dying, the Egg-Shaped Apostle came across Guts' deformed Child, who was nearly dead due to it using most of its power to save Casca. Knowing they both would die soon, the Egg-Shaped Apostle swallowed the baby, saying: "You can dream in your cradle of the new world inside me".

Understanding that the Egg suffered greatly in life, Luca bundled up flowers and releases them into the air to make her final respects to the Egg. 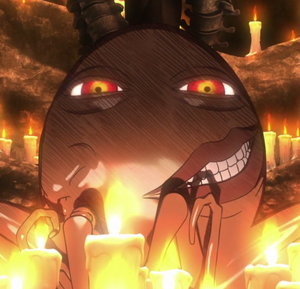 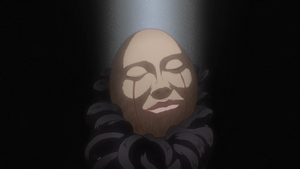 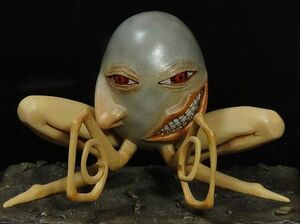 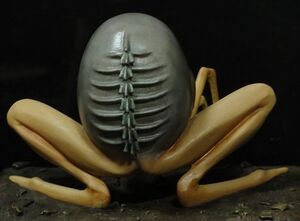 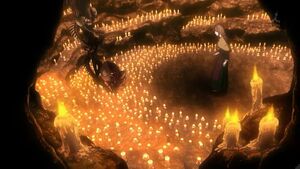 The Egg telling his life to Luca.