Egghead was an antagonist created for the 1960s Batman television series. The character was identifiable by his pale bald head and white and yellow suit. He believed himself to be "the world's smartest criminal," and his crimes would usually have an egg-motif to them as well as including egg puns in his speech where appropriate such as "egg-zactly" and "egg-cellent." Additionally, he would use a wide assortment of egg-shaped weapons, such as laughing gas eggs and tear gas eggs (laid by chickens on a diet of onions).

He was portrayed by the late Vincent Price, who also portrayed Dr. Phibes in The Abominable Dr. Phibes and Dr. Phibes Rises Again, Prince Prospero in The Masque of the Red Death, King Richard III in the 1962 remake of The Tower of London, Professor Henry Jerrod in House of Wax, Cardinal Richelieu in the 1948 film adaptation of The Three Musketeers, Zigzag in The Thief and the Cobbler, and Professor Ratigan in Disney's The Great Mouse Detective.

The master criminal known as Egghead is one of the smartest men in the world, a genius by anyone's standards. With his great genius comes a great ego. He is forever talking about his own brilliance, and at one time he had his female companion Miss Bacon write down every word he said in order to record his brilliance for posterity in a book entitled "How To Be A Better Criminal". Soon afterward, he met and became romantically involved with Olga, Queen of Cossacks. They were engaged for some time, but Olga refused to marry him until he could provide her with a suitable dowry, which provided him with a reason for returning to crime.

Not much else is known about Egghead besides a few personality tidbits. He never pays for anything and he eats nothing but grade triple A white eggs. Also, He finds telephones irresistible and often makes his hideout in The Ghoti Ouefs- a caviar company.

Egghead was introduced in the second season two-parter, "An Egg Grows in Gotham" and "The Yegg Foes in Gotham," where he schemed with Chief Screaming Chicken of the Mohican Indian tribe to revert control of Gotham City to the Chief's people. In return, Egghead would also govern the city and enable the criminal underground to run amok. Needless to say, their scheme was foiled by Batman and Robin].

Egghead would return twice in the third season with his new partner and love interest, Olga, Queen of Cossacks, and in exile from Bessarovia (The two third-season appearances were actually filmed as one multi-part story, but split into two separate stories prior to airing). In the first appearance, Egghead disguised himself as a deliveryman in order to capture Commissioner Gordon and load him into Olga's getaway balloon. Egghead and Olga hold Commissioner Gordon for a ransom demand of $0.10 tax on every egg that is eaten in Gotham City. Egghead even appeared at a diner that Chief O'Hara was at to make sure his ransom demands are occuring. Batman and Robin then learn that Egghead and Olga plan to steal the Samovar Of Genghis Khan from the Bessarovian Embassy. Batman and Robin plan a trap by hiding in the Samovar of Genghis Khan only to be gassed by the Cossacks at Olga's hideout upon springing their trap. Commissioner Gordon and Robin are then seen about to be made into borscht by Ambassador Omar Orloff (who was Egghead and Olga's double agent) while Batman is to be made into Olga's husband since Bessarovian queens are entitled to 6 husbands which Egghead is not one of. Batgirl and Alfred Pennyworth managed to find them and free the Caped Crusaders and Barbara Gordon. Egghead uses eggs laid by chickens that only ate onions on the Caped Crusaders which emitted a tear gas that made the Dynamic Trio cry enough for Egghead and Olga to make their escape. Egghead, Olga, and the Cossacks then raid the Gotham Radium Center and steal 2 pounds of raidum. Then they steal a giant fossilized egg of a Neosaurus from the Gotham City Museum. Egghead plans to use the radium to hatch the Neosaurus egg and unleash it upon Gotham City. When the hideout was found by the Dynamic Trio, Robin and Batgirl are easily captured and forced to watch the Neosaurus egg being hatched. When the Neosaurus (which is actually a recycled version of the Gundemar costume from "The Questing Beast" episode of "Lost in Space") hatches, it ends up advancing towards Egghead and Olga causing them to run out of the building and surrender to the authorities outside. The Neosaurus turns out to be Batman in disguise. Egghead, Olga, and the Cossacks later escape from prison and raid Gotham City Museum where they steal the Sword of Bulbul and the Egg of Ogg. Then Olga and the Cosscaks steal 500 lbs. of caviar that was to be given to the people of Gotham City by the Czar of Szamarkand with Egghead riding behind them on a burro. While Olga and the Cossacks escape, Egghead arrived on his burro and is caught by a museum guard. Batgirl arrives and manages to convince Egghead to take her to Olga's hideout. Batman and Robin end up following the trail to Olga's hideout. Batman and Robin find that Egghead has lured Batgirl into a trap where she is bound and forced into a saber-dance while Olga's Cossacks try to stab her with their scimitars. Batman and Robin arrive and they free Batgirl. The Dynamic Trio fights with the Cossacks until Egghead throws Batgirl into a vat of caviar. While Batman and Robin get Batgirl out of the caviar vat, Egghead, Olga, and the Cossacks ride off only for them to run into the police. Egghead was also one of six arch-criminals freed from prison by Dr. Cassandra Spellcraft to form her new invisble gang but this brief cameo appearance was by a stand-in.

Since he was a genius, Egghead was able to invent some most ingenius little gadgets like an egg that was specially designed to disrupt the high-tech security surrounding the Gotham City Charter.

Just as Batman and Robin do not go at crime-fighting alone, Egghead needs fellow partners in crime to assist him with his malicious schemes:

He made a cameo in the episode "Day of the Dark Knight" as an inmate trying to escape from Iron Heights Penitentiary. He, like all the other inmates, was stopped by Batman and Green Arrow.

In issue 16 of the comic book spin-off, titled Egg Hunt or: The Evil of Egghead, Batman and Wonder Woman team up to foil Egghead's plans to summon Egg-Fu to Earth.

In The Lego Batman Movie, Egghead appears as one of the many villains working for the Joker. In the opening of the movie, as per Joker's plan to takeover Gotham City, Egghead covers the Bat-signal with eggs and prevents it from working. In the final battle against the army of criminals Joker freed from the Phantom Zone, Egghead uses a giant robot that shoots eggs from it's cannons to attack them. 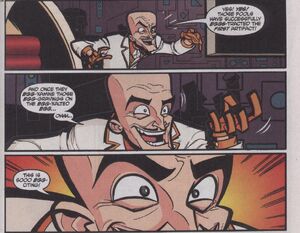