Villains Wiki
Register
Don't have an account?
Sign In
Advertisement
in: Doctors and Scientists, Mastermind, Sonic Villains,
and 61 more

Destroy as much of the universe as he can so he can rebuild it in his image.

Erase Eggman and his failures from history.
Kill Silver the Hedgehog and Blaze the Cat.

He is a futuristic mad genius introduced as an alternate universe counterpart of Dr. Eggman, though revealed as Dr. Eggman's descendant in later sources, and the archenemy to Sonic's counterparts Blaze the Cat and Silver the Hedgehog.

Eggman Nega (originally spelled NEGA, with all caps) first appeared in Sonic Rush as an inter-dimensional counterpart to Dr. Ivo "Eggman" Robotnik, with whom he was gathering the Chaos Emeralds and the Sol Emeralds. Saying that "It's best to get someone else to do the dirty work", Eggman Nega sent Dr. Ivo Robotnik to gather the Sol Emeralds in Blaze's dimension, while he started an invasion on Sonic's world and searched for the Chaos Emeralds. Ultimately, his actions resulted in Blaze the Cat entering Sonic's dimension on a hunt for the emeralds stolen by Dr. Eggman. Sonic would always fight Eggman Nega as a boss (Blaze on the other hand would fight Eggman). The Sol Emeralds being taken to Sonic's dimension threatened to cause both worlds to collide (although this could be prevented with the Emeralds in the right hands) and destroy both. While Eggman Nega states that both villains want to build the "Eggmanland beyond dimension", it's hinted that Nega's true goals lie elsewhere.

In the end, Sonic and Blaze transformed into Super Sonic and Burning Blaze with both sets of emeralds and defeated the two Eggmans, supposedly killing them in the explosion of their mech; however, they returned as a plot twist at the end of the next game.

In Sonic Rush Adventure, Eggman Nega apparently takes part in creating the "Ghost" robot army for Captain Whisker in cooperation with Dr. Ivo Robotnik. Both doctors are after the sacred Jeweled Scepter, and, conspiring from shadows, don't make a move until Sonic & Blaze gather all of the Emeralds, while the Ghost robot army still occupies most of the islands in the archipelago around the Southern Island. After stealing the Jeweled Scepter, the doctors face the heroes in a machine called Egg Wizard.

While Dr. Eggman is still after a plan to create Eggmanland, powered by the power of Jeweled Scepter, Eggman Nega makes it clear to Blaze that he wishes to achieve something quite different.

Luckily for the heroes, Marine the Racoon rushes to strike the powered up Egg Wizard with a hydrogenetic blast, stopping its attack and allowing Sonic and Blaze to destroy the machine's power core. The Egg Wizard is destroyed in a massive explosion, but future games show that both somehow escaped.

In Sonic Rivals, Eggman Nega makes his next appearance, this time being pursued by Silver the Hedgehog. Instead of going with Nega's identity as an inter-dimensional counterpart to Dr. Eggman, the game reveals Eggman Nega's true origin as a descendant of the Robotnik family (a fact later confirmed at Sonic Boom by IIzuka Takashi). Nega's comes to the conclusion that the main reason for the future world not accepting his scientific genius is due to Dr. Eggman's ruining the Robotnik family reputation, so Dr. Eggman Nega travels back in time to remove his ancestor from the timeline.

While Dr. Ivo "Eggman" Robotnik himself is first thought to be the primary antagonist of the game, he is actually on heroes' side that time and is a victim of Eggman Nega's actions. The player soon finds out that Eggman Nega has captured Ivo and is disguising himself as him. Using a special camera, he turns several objects and characters into cards, with the objective of turning the world into a card that he will be able to control. However, while Nega never reveals his identity to either Sonic the Hedgehog or Knuckles the Echidna (leading them to believe that Dr. Eggman was the mastermind behind events in the game), Shadow the Hedgehog and Silver the Hedgehog rescue Dr. Eggman, who helps them to launch into outer space and stop Nega's world-destroying plan. During the somewhat ambiguous ending of the game, Nega is captured inside a card of his own by Silver, yet it was never revealed how he freed himself from the card that he was imprisoned in for the sequel.

In Sonic Rivals 2, Eggman Nega is bent on creating hell in Sonic's world. He tries to power and awaken an inter-dimensional monster called the "Ifrit" to destroy the world by using the Chaos Emeralds and the Chao to do it, after reading old files by Professor Gerald Robotnik, Ivo Robotnik's grandfather. It is made evident from the very beginning of the story that Dr. Ivo Robotnik and Eggman Nega are not working together, as Dr. Eggman sends off Metal Sonic and Shadow the Hedgehog to prevent Nega from destroying the world.

All of the hero teams, manipulated by both Dr. Eggman and Eggman Nega, meet up at the Mystic Haunt Zone where the portal to Ifrit's world is. Despite Rouge only collecting six of the Emeralds for Nega's secret request, the portal opens anyway and Eggman Nega dispatches his new Metal Sonic version 3.0 to awaken the Ifrit. Despite possessing some of heroes, the Ifrit is defeated by member of other hero teams. Shadow and Metal Sonic close the portal and seal themselves and Eggman Nega in Ifrit's dimension. Metal Sonic reveals that the seventh Emerald was stored in his chassis and he and Shadow use Chaos Control to exit that world. Eggman Nega is left trapped in Ifrit's dimension, his legs caught under some rubble.

Eggman Nega is a polite gentleman, despite being cruel and calculating. He appears to be insane, trying to destroy the whole world along with himself on numerous occasions. Eggman Nega is not able to consider his own actions being wrong, blaming the heroes for the fail of his plans and Dr. Eggman for creating a bad reputation for Robotnik family. He has also been described as very sneaky, even disguising himself as Dr. Eggman on some occasions. He can sometimes lose track of important details while making unnecessary long speeches.

Overall, his personality, along with design of his clothes, is a total subversion of Dr. Eggman's, hence the alias NEGA. While Dr. Ivo Robotnik is childish, chaotic and evil on the outside, but wise and reasonable on the inside; Dr. Eggman Nega is calm and composed when facing his adversaries, but his goal is complete and utter destruction of life and order, even if he dies together with the world or dimension he destroys. Eggman Nega, with his calm yet cruel nature, is more similar to Robotnik Prime from Archie Comics and SatAm TV show, than to mainstream Dr. Robotnik from video games. Although Sonic Rivals established him as a part of Robotnik family, Eggman Nega's real name is never revealed, and he is known only by his alias; unlike Dr. Eggman, whose true name is Ivo Robotnik. 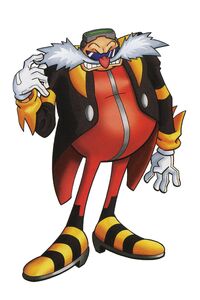 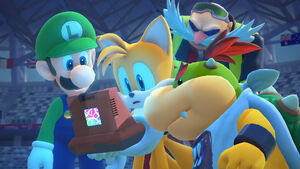 Eggman Nega along with Tails, Luigi, and Bowser Jr. in the story mode for Mario & Sonic at the Olympic Games Tokyo 2020. 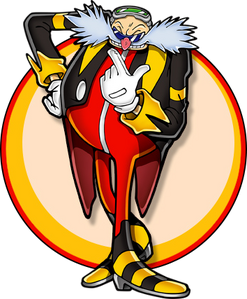 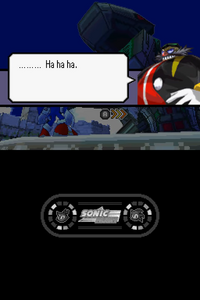 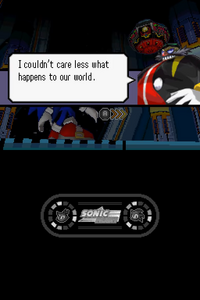 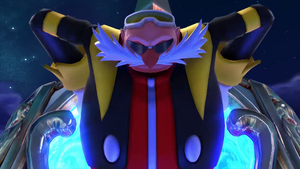