Egor Korshunov (in Russian: Егор Коршунов) is the main antagonist of the 1997 film Air Force One. He is the lead hijacker of Air Force One and is also a Radek loyalist.

He was portrayed by Gary Oldman, who also played Count Dracula in Bram Stoker's Dracula, Drexl Spivey in True Romance, Norman Stansfield in Léon: The Professional, Jean-Baptiste Emanuel Zorg in The Fifth Element, Dr. Zachary Smith in Lost in Space, Mason Verger in Hannibal, Carnegie in The Book of Eli, General Grawl in Planet 51, Ruber in Quest for Camelot, Lord Shen in Kung Fu Panda 2, Dreyfus in Dawn of the Planet of the Apes, Daniel Clarke in Call of Duty: Black Ops and Vladislav Dukhovich in The Hitman's Bodyguard.

A former political comment operator for Moscow Radio, Egor Korshunov is a politically motivated, Cold War-era Kazakh ultranationalist who leads his comrades on his plan to hijack Air Force One (the aircraft of the President of the United States) in an attempt to force President James Marshall to release General Ivan Radek, a brutal communist dictator whose one-year regime in Kazakhstan took the lives of 200,000, from prison. Korshunov and his comrades disguised themselves as journalists and were cleared to board the plane by using fake identities and fingerprints, those of deceased journalists (possibly murdered by Korshunov and his gang). After takeoff, the group went into the weapons cabinet with the help of a corrupt Secret Service agent and take bulletproof vests and weapons, using them to take control of the plane and keep the passengers as hostages.

As the plane lands at Ramstein, Korshunov breaches the cockpit and kills the pilots wherein his friend, pilot Andrei Kolchak takes control and get the plane back into the air, setting course for Kazakhstan. He calls Vice President Kathryn Bennett, and demands Radeks release in exchange for the hostages, with threats of killing one hostage every half-hour. When the deadline came to an end, Korshunov intended to execute the First Lady, but Jack Doherty, the national security adviser, talks to him. Doherty compares the Vice President's role to the Queen of England, basically that she does not have much power. He suggests that Korshonov let him talk to Bennett. She calls, and when Korshunov learns that Radek has not been released yet. He then executes Doherty. He tells Bennett that Doherty was a very good negotiator, "he just bought you another half hour".

Later, he murders Melanie Mitchell over the intercom in an attempt to get who he believes is a Secret Service agent (actually President James Marshall), who is hiding in the cargo hold, to come out and surrender. The president winds up cutting the fuel wires and the plane begins losing, "dumping", fuel. Marshall contacts the White House and tells them that he is going to get the hostages to parachute out of the plane while the terrorists are distracted with the midair refueling. Most of the hostages escape, but Marshall himself is captured by the terrorists. With Marshall captured and his hands tied up with duct tape, Korshunov beats him up and tortures Marshall and explains his rage to him, saying that Marshall had given his country to "gangsters and prostitutes".

He puts a gun to his daughter's head and orders Marshall to tell the new democratic Russian President Stolicha Petrov to release Radek immediately, and Pretrov reluctantly obeys on Korshunov's promises to free him, his family, and the remaining party. A helicopter and some loyalist soldiers greet him. Although Korshunov rejects his promise to let the hostages go once Radek is released, Marshall secretly executes a backup plan. Using a glass shard to cut through his bonds, Marshall frees himsels and kills the remaining two terrorists, including Kolchak. Korshunov drags the First Lady into the cargo hold, using her as a hostage. Marshall opens up the cargo hatch and wraps a parachute cord around Korshunov's neck before telling him to get off his plane, and letting it go, snapping his neck and causing him to be flung from the plane. His dead body then floats away into the distance towards an unknown fate, still attached to the parachute.

With Korshunov and his henchmen dead, Marshall calls Petrov to call off the release. The prison guards tell Radek to halt, but the tyrant makes a run for the helicopter as a gun battle erupts between the loyalists and the prison guards. Just as he reaches the helicopter, he is shot to death by snipers.

Egor Korshunov is a psychopathic man that doesn’t necessarily enjoy murdering, but he feels compelled to do it for the benefit of his country, which he feels has been corrupted and weakened after Radek was imprisoned. Despite this, Korshunov is a very brutal man, ready to slaughter anyone without hesitation in order for his demands to be met, including ladies and kids. Korshunov did so without mercy or pity and often turned on the intercom system so the President could hear his co-workers beg for their lives and pass on. Korshunov reveals that he doesn’t think of himself as a monster and that he has a wife and three young children, making his relentless actions even more interesting. Korshunov claims that he knows what he is doing is wrong, but he would turn his back on God himself for his country, making him truly believe his views to the point of severe radicalism. Korshunov was also a highly brilliant guy, having successfully taken over Air Force One nearly single handed, and got into a cat-and-mouse game with the President of the United States, which he nearly won. 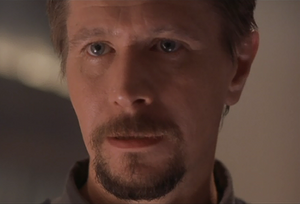 Korshunov holding the passengers of Air Force One hostage

Korshunov holding a gun to the President's daughter's head

Korshunov's neck is snapped by his own parachute