Demonic Conjurors
The Eight Demon Sorcerers, also known as the Demon Sorcerers, are a group of 8 ancient demon twins with mystical powers and the main villains from the second season of Jackie Chan Adventures.

The Eight Demon Sorcerers are 8 demon siblings, who all ruled different parts of Earth, but were then banished to the Netherworld by the Eight Immortals, a group of powerful Chinese chi wizards imbued with eternal life who used the Pan Ku Box to seal them away. Shendu was the only one who escaped banishment, only to be imprisoned in a statue form by the warrior Lo Pei who was his former servant.

After Shendu was killed by Jackie and Jade Chan, his spirit returned to the Netherworld, where his brothers and sisters demanded that Shendu releases them immediately and placed a spell on him that forbids him from leaving a host body he possesses. Shendu attempts to possess Jackie Chan, but accidentally possesses Valmont instead, then forces the Dark Hand to work for him once more to release the demons.

After all portals are sealed and Shendu is exorcised from Valmont, he decides to use the Book of Ages to change history. This time, he successfully possesses Jackie, then travel to Australia, where the book is located. He is followed by Jade, Uncle and Tohru, but they couldn't stop him, as history is completely rewritten with the demons ruling Earth again. Jade is the only one to retain her memories, as she had accidentally tore a page of the book that spoke about herself. She manages to convince Jackie and Uncle to help banish the demons, eventually going to Australia to set things straight again, but not without being followed by Shendu and the remaining Demon Sorcerers. The demons are all banished again and history is restored to normal. 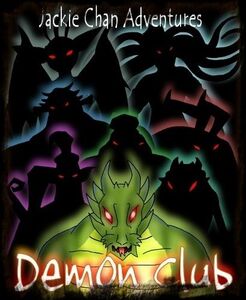 A fan art of Shendu and his evil siblings, the Demon Sorcerers 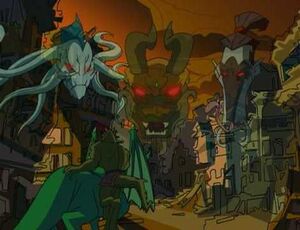 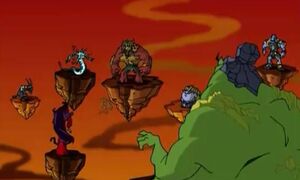 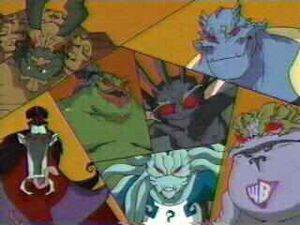 7 of the 8 powerful Demon Sorcerers.
Add a photo to this gallery 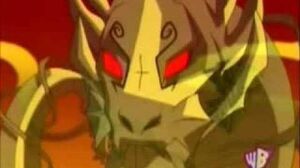 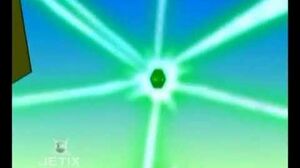 Retrieved from "https://villains.fandom.com/wiki/Eight_Demon_Sorcerers?oldid=3535955"
Community content is available under CC-BY-SA unless otherwise noted.