Inquisitor of the Galactic Empire

Trained in the ways of the dark side

Searching for Jedi and eliminating them.

Dark Knight
The Eighth Brother was an Imperial Inquisitor who was charged in finding the long-forgotten Sith Lord Darth Maul but instead encountered the Jedi company of Kanan Jarrus, Ezra Bridger, and Ahsoka Tano. Maul teamed with the Jedi and battled the Eighth Brother along the Fifth Brother and Seventh Sister.

He was the fourth Inquisitor to appear in the show Star Wars: Rebels. His appearance was his first and last and shortest in the series. He was masked the whole time but he was a Terrelian Jango Jumper. Eighth Brother was the third member of the trio to die on Malachor but was unique among the Inquisitorial for his seeming dedication to Palpatine above all.

When Darth Vader first claimed leadership of the order, Eighth Brother protested that Palpatine was his only master and it was only the Grand Inquisitor's insistence that put him back in line. The Eighth Brother served the Galactic Empire and was trained as an Inquisitor in the ways of the dark side under Darth Vader's watch. The Eighth Brother was already an elite fighter and agile warrior since his species allowed him to leap to extreme lengths. After the death of the Grand Inquisitor, the remaining Inquisitors consisting of the Eighth and Fifth Brothers and Seventh Sister were charged by Lord Vader to search the galaxy for any surviving Jedi who escaped Order 66.

Search for the Shadow

While the Fifth Brother and Seventh Sister followed the trail of a group of Rebels across the universe, the Eighth Brother was given a new task by Lord Vader under the orders of the Emperor to search for Darth Maul who was identified as the Shadow and eliminate him. The Eighth Brother later traveled to the planet Malachor and found the Shadow hiding beneath a Sith temple and confronted him. He instead encountered the Jedi group of Kanan, Ezra, and Ahsoka and stalked them for a bit until attacking and separating Ezra from the others.

The Eighth Brother was forced to retreat but was pursued by Kanan and Ahsoka. He was unable to escape because their droid sabotaged his TIE fighter and was captured and questioned by the Jedi. While being questioned, he managed to send out a signal to the Fifth Brother and Seventh Sister for aid. They later arrived and freed him and together attacked the Jedi and managed to outnumber them for a bit until Ezra arrived with the Shadow revealed to be Maul. The former Sith and Jedi battled the Inquisitors and forced them to temporarily retreat.

The Inquisitors later discussed the potential threat of Maul possessing the Sith holocron that was sought by Darth Vader, and the Eighth Brother impulsively left the pair to reclaim it on his own. He attacked Kanan and Ezra and managed to knock Kanan out and tried to kill the boy before Maul and Ahsoka arrived and drove the Eighth Brother away. Teamed with the Fifth Brother, they engaged Kanan and Ahsoka, while the Seventh Sister engaged Ezra and Maul.

After Maul managed to kill the Seventh Sister and later the Fifth Brother, while Kanan damaged the Eighth Brother's lightsaber. Over-matched and outnumbered, the Eighth Brother attempted to flee using his spinning lightsaber blades to fly away as he leaped from the top of the temple. However, the damaged weapon malfunctioned, causing it to explode into pieces, and sent the screaming Inquisitor plummeting to his demise. 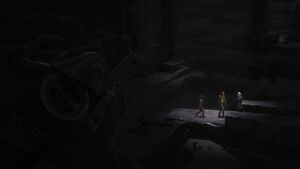 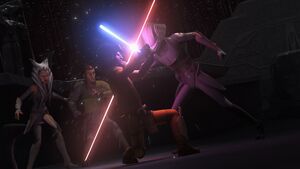 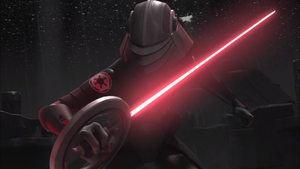 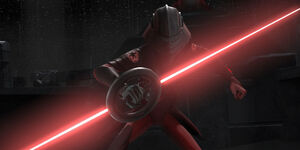 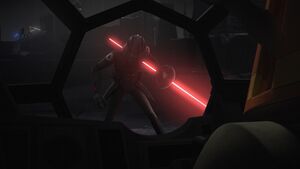 Retrieved from "https://villains.fandom.com/wiki/Eighth_Brother?oldid=3750499"
Community content is available under CC-BY-SA unless otherwise noted.