God of the Labyrinth

Rule the world with the other Great Old Ones.

Eihort, otherwise known as the God of the Labyrinth or the Pale Beast, is a Great Old One created by Ramsey Campbell in his rendition of H.P. Lovecraft's Cthulhu Mythos. It also appeared as a character in the module game The Call of Cthulhu.

It is a spider-like creature with thousands of innumerable legs and eyes that manifest all over its body. Its outer body is a gelatinous mass. As with the other Great Old Ones, Eihort ruled the Earth before getting locked away. It lives in an underground tunnelway encircling the entire fictional Severn Valley region.

Much like other deities like Nyarlathotep or Y'golonac, Eihort has the ability to understand humans and actively seeks them out. Whenever it catches them, it gives them an ultimatum: either allow it to gestate its brood inside of their body or be killed with a swing of its titanic fist. Those that permit Eihort to impregnate them with its brood are slowly killed by getting eaten on the inside out.

There also exists a type of person called a "Chosen." The Chosen are humans that have their lives extended enough so they could find more victims for Eihort to gestate. It is said that when mankind falls in the imminent future, Eihort's offspring will invade the world and conquer it. 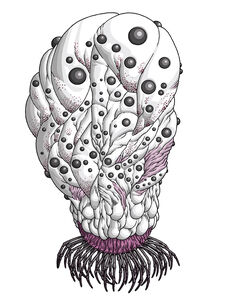 Retrieved from "https://villains.fandom.com/wiki/Eihort?oldid=4065992"
Community content is available under CC-BY-SA unless otherwise noted.