Vengeful Minion
Second Lieutenant Ein Dalton is an officer in the Mobile Suit Corps of the Gjallarhorn Mars Branch and a major antagonist in Mobile Suit Gundam IRON-BLOODED ORPHANS.

After the deaths of his superiors against Tekkadan, Ein would join up with Gaelio Bauduin to pursue Tekkadan and avenge Crank Zent.

He is voiced by Yuuma Uchida in the original Japanese version and by Max Mittelman in the English dub.

Alongside Crank Zent and Orlis Stenja, Ein was part of a contingent of Gjallarhorn forces sent by Major Coral Conrad of the Gjallarhorn Mars Branch to attack the Chryse Guard Security base and kill Kudelia Aina Bernstein in order to further stir up tensions between Earth and Mars.

After the Gjallarhorn forces were beaten by Mikazuki Augus in the Gundam Barbatos and Orlis was killed, Crank Zent went to redeem his honor by making another attempt to capture Kudelia. Ein asked to go with him, but Crank shot him down and told him that he had to do it alone.

After Crank's death in battle against the Gundam Barbatos, Ein joined up with the forces of Gaelio Bauduin and McGillis Fareed, who were pursuing the CGS (which had renamed themselves to "Tekkadan" following a coup in the ranks) and Kudelia in space, seeking to get revenge for Crank's death. Ein would grow close to Gaelio, who despite being of one of Gjallarhorn's Seven Stars families treated him as an equal and with respect.

Tragically, Ein would become consumed by his desire to avenge Crank and fulfill his last orders. After being fatally wounded in battle against Tekkadan protecting Gaelio from an attack, Ein was saved by undergoing an Alaya Vijnana surgery to have his mind hooked up to the experimental EB-AX2 Graze Ein. The surgery was conducted by McGillis, who wanted to see if such a fusion could be possible. The experiment was a success and, though Gaelio was horrified, Ein was happy that he had been saved as it meant he could continue with his efforts to avenge Crank.

Later, during the Battle of Edmonton, Ein, fused with the Graze Ein, confronted Mikazuki in the Gundam Barbatos on the outskirts of the city as he was protecting the convoy transporting Kudelia Aina Bernstein and Togonosuke Makanai into the city for the Arbrau Prime Minister election. While initially fighting Mikazuki in Barbatos, after hearing that Kudelia was in the transport, a delusional Ein flew into the city to fulfill Crank's mission by killing Kudelia, disrupting the city's electrical system with his Mobile Suit's Ahab Reactor. Ultimately, Ein was slain when the Graze Ein was destroyed by Mikazuki after he tapped into the full powers of Gundam Barbatos. The remaining parts of Ein's brain and his Alaya-Vijnana system were later salvaged and used to create the Alaya-Vijnana Type E, which allowed Vidar, Gaelio's new identity, to control the Gundam Vidar without risk to his mind or body. 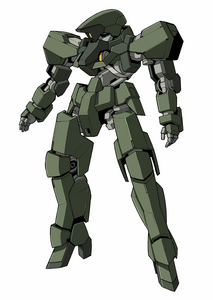 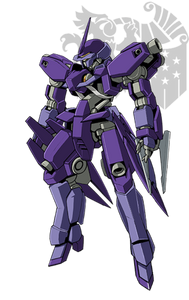 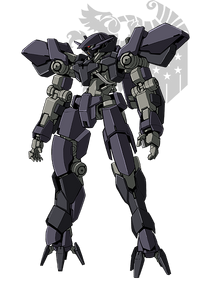 B-AX2 Graze Ein
Add a photo to this gallery

Retrieved from "https://villains.fandom.com/wiki/Ein_Dalton?oldid=3828482"
Community content is available under CC-BY-SA unless otherwise noted.