Assist the Badan Empire in taking over the world.

Minion
Eisuke Mikage is an official of the Badan Empire who believes that power is justice and the secondary antagonist of the Kamen Rider ZX TV Special.

He is able to become Tiger-Roid, a cyborg able to produce a wide variety of artillery from his body and has attributes abilities equal with Ryō.

In the manga, he was originally an Interpol officer.

Birth of the 10th! Kamen Riders All Together!!

Eisuke Mikage befriended Ryo Murasame/Kamen Rider ZX after the latter was brainwashed and converted into to serve Badan. After Ryo defected and joined the Kamen Riders to stop Badan's plan, Mikage became Tiger-Roid to fight ZX. He is destroyed by Kamen Rider ZX's ZX Kick.

Due to a change in history caused by Ankh leaving a O Medal behind in 1971, Shocker achieved its goal of world dominion with the Shocker Greeed which defeated the Double Riders, and new members from the various groups that would had manifested in the normal timeline after Shocker's destruction. Tiger-Roid was among the many monsters who were part of the this alliance. As more and more of the Kamen Riders started appearing and fighting Shocker's forces, ZX fought against him once more.

Tiger-Roid was revived as part of Dai-Shocker in the "super hero taisen" incident, led by Tsukasa Kadoya/Kamen Rider Decade, rivaling Captain Marvelous/Gokai Red and Dai-Zangyack. After Rider Hunter Silva of Dai-Zangyack and Doktor G of Dai-Shocker revealed themselves as the true masterminds and joined forces to destroy the Kamen Riders and Super Sentai, Tiger-Roid appeared during the final battle between the Shocker-Zangyack Alliance against the combined forces of the Sentai and Riders.

Tiger-Roid returns as one of the Inhumanoids in serve to the Underground Empire Badan. 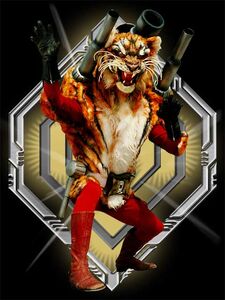 Tiger-Roid
Add a photo to this gallery

Retrieved from "https://villains.fandom.com/wiki/Eisuke_Mikage?oldid=4212994"
Community content is available under CC-BY-SA unless otherwise noted.