Villains Wiki
Register
Don't have an account?
Sign In
Advertisement
in: One Piece Villains, Pirates, Anime Villains,
and 18 more

Kill Luffy and anyone that gets in his way (failed).

El Drago is an anime-only villain in the anime One Piece. He is the main antagonist of the first One Piece Movie.

He was voiced by the late Kenji Utsumi.

At some point during his life, El Drago gathered a crew and dedicated himself to finding and taking as much gold treasure as possible. He then later on decided to go after the treasure that was in custody of the legendary pirate known as Woonan. El Drago would eventually track down Woonan's crew and killed all of them. El Drago also captured Tobio who watching him and was hiding on the ship. He then finds a map on their ship that can lead them to Gold Island where Woonan's treasure is located and decides to move out where he would confront Luffy.

El Drago notices that some of his henchmen, known as the Hyena Three that he sent as scouts, are having trouble with Luffy. He then fires a sound blast that separates the Straw Hat Pirates. El Drago gets annoyed when the Hyena Three question his "vocal training" but shrugs it off while he talks about Woonan's map. Unbeknownst to any of them, Nami was able to sneak onboard their ship.

Once they reach Gold Island, El Drago and his underlings find and capture Usopp. Before they try to kill him, Usopp tricks them into letting him look at the map and gives them bad directions to find the treasure. However, El Drago takes Usopp with them in case he is lying to them. They continue scouring the island but reach an obstruction due to a landslide. El Drago then pays four gold coins to his second in command, Golass, to get rid of the debris and is thrilled after seeing Golass' work. El Drago's crew and Usopp later reach a castle and then realize the Usopp had been lying to them the whole time. Nami, who was secretly following them undetected, then stops them from killing Usopp and also tricks them that the treasure is hidden beneath the castle.

El Drago and his men unsurprisingly believe her and then decides to destroy the castle. Although he is told it would take at least three days to dig it all out, El Drago says it will only take ten seconds. He then attacks the castle with his sound blasts due to his Devil Fruit. El Drago is stopped when Luffy interferes (who is chained to Zoro). Luffy calls him both a lion and a cat before introducing himself and Zoro. Luffy then states that he believes that Woonan is alive and somewhere on the island. El Drago doubts him however and scoffs at that impossibility. Tobio then argues back at El Drago where he responds by grabbing Tobio and trying to kill him with his gold nails. Fortunately, he is stopped by Zoro before El Drago can fatally stab Tobio. While Zoro is fighting El Drago with only one of his swords (Wado Ichimonji) in his mouth, he can't get close to El Drago due to Luffy's leg getting stuck on a rock. Luffy's Devil Fruit abilities causes both him and Zoro to be catapaulted into the air after being rebounded.

El Drago is confused but he regains his composure and notices that Usopp and Nami are gone. El Drago later appears when he and his underlings climb the Gold Island mountain and stops the Straw Hat pirates from checking out Woonan's hut. He then attacks Tobio but his grandfather, Ganzo, interferes to which El Drago retaliates by knocking him away which causes Ganzo to spill his oden. El Drago then foolishly believes that there might be gold in the pot and kicks it over, where Tobio tries to tell him to stop but to no avail. El Drago tries to kill Tobio when he gets in his way and before he can attack him, he is intercepted again this time by Luffy.

Luffy then picks up the oden and eats it stating that is delicious. El Drago, disgusted and annoyed by this, orders Golass to kill Luffy but is blocked by Zoro. He then gets angry and tells Golass that he would pay him an increasing amount of gold during his fight with Zoro but is surprised when Golass is defeated (due to Golass not truly wanting to work for him and being paid for it). Since Golass is incapacitated and can't fight, El Drago personally gets involved and fights Luffy himself and attacks him with one of his sound blasts. They both have an extremely tense battle that eventually leads to El Drago's armor being broken. This sets him over the edge and uses a powerful sound blast that lasts for several seconds. He later comes back to reality but is too late to realize that Luffy catches his blast, thanks to his Gomu Gomu no mi (Gum Gum fruit), he punches El Drago and crashes her into the ground and expresses his insatiable gold obsession for the last time before Luffy uses Bazooka attack that sents him flying towards the island and falling into the sea. It is unknown if he survived the fall or not.

El Drago's height is taller than his crewmates and enemies alike. He is dark-skinned and has red hair that resembles a cat or lion. Due to his unhealthy obsession with gold, he wears shoulder pad armor made of gold. El Drago wears a white shirt under his gold armor and has his nails covered with gold. Due to his gold nails being hard and sharp golden, he can use them as weapons.

El Drago is a greedy, self-centered, arrogant, obsessive, stubborn, and ruthless individual who will not stop at anything to achieve his goals. Because of his obsession with gold, he wore golden armor and sharp wear-on nails as part of his combat costume and to express his desires for gold. El Drago was also stubborn and did not want to acknowledge that Woonan's treasure might not have been there. He was also arrogant believing it to be gold (when the treasure was actually just friendship and that all the other treasure was given back to where they came from). El Drago's love of gold causes him to reject any other treasure and basically everything else, making him very dangerous and uncaring to anyone.

El Drago consumed the Goe Goe no Mi (the Scream Scream Fruit in Japanese), a Paramecia Devil Fruit that allows him the power to generate a wave of sound that can cause explosive destruction when he yells. The sound wave that he emits looks like that of a laser beam. El Drago can even control the intensity of the beam. However, its strength of being powerful has a weakness and that is it can be deflected, causing potential backfiring effects. Besides that, it has the other standard Devil Fruit weaknesses (when a user is exposed in an ocean, he sinks like a hammer and if the user is touched with sea stone or sea water, the user is weakened). 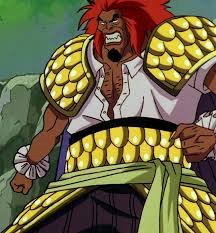 El Drago in his armor 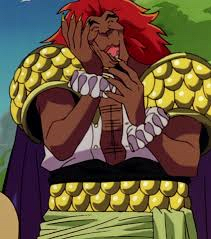 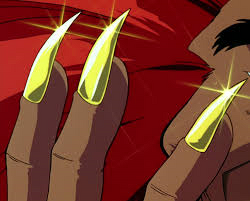 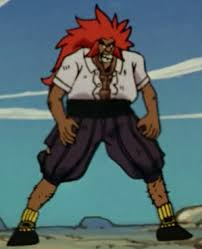 El Drago without his armor

El Drago being defeated by Luffy.