El Jefe is a mercenary tiger who appears in Sly 4: Thieves in Time, serving as the main antagonist of the game's first past level set in Feudal Japan.

He was voiced by Nolan North.

El Jefe's men have taken over Rioichi Cooper's sushi house and led to Rioichi being imprisoned for "tainted sushi". After Sly frees Rioichi, Bentley pulls up information regarding El Jefe, noting his past successes in bringing down governments for the highest bidder as well as evading the law. During the events of Sly 4, he works on behalf of Cyrille Le Paradox in order to collect Rioichi's cane. Naturally, this puts him at odds with the Gang.

Towards the end of the level, El Jefe ambushes Rioichi and steals his cane, prompting Sly to give chase. El Jefe proves to be quite formidable due to his speed, swords, and element attacks. Nevertheless, Sly defeats the tiger, although he loses the cane to one of Le Paradox's goons. Following his defeat, El Jefe is finally arrested for his crimes and sentenced to a South American prison where he is forced to roll cigars, but not allowed to smoke them.

El Jefe proves to be quite the formidable fighter as shown during his boss fight when he leaps over burning and spiked towers all while taunting Sly. The tiger has a massive ego, believing this to be a demonstration of his true strength and once being noted by Bentley as claiming that he could arrange for "three blind mice with spoons" to overturn a country. Despite his ego, El Jefe is a tough opponent until Sly deflects his fire attacks back at him, leaving El Jefe open for attack.

He is also a bit of a pervert, as he is shown slapping Murray on the butt while the hippo is disguised as a Geisha. He also is voiced by Nolan North, who also voiced Le Paradox, Raphael in "TMNT" and the Krang in the 2012 Ninja Turtles cartoon.

Given his appearance, cigar-smoking, and Spanish accent, El Jefe is an anthropomorphic tiger version of Fidel Castro. Even his title "El Jefe," which is Spanish for "The Boss" was also a nickname for the former Cuban dictator. 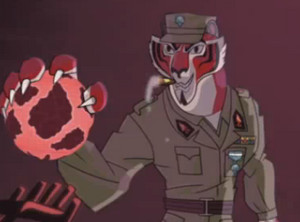 Retrieved from "https://villains.fandom.com/wiki/El_Jefe?oldid=3459195"
Community content is available under CC-BY-SA unless otherwise noted.